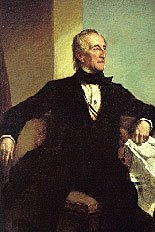 There are a number of ways to remember presidential order. Here's one to help with the first ten presidents. Yes it requires a little memorization, but you can do it. I have faith. Let's review:
John Tyler was known as the "Accidental President" for as we learned last week, never before had a President died in office, leaving the country without its leader. It was Tyler's actions (taking the oath of office, becoming president rather than "acting" president) that were later codified into the 25th Amendment to the Constitution.

During Tyler's administration, the Republic of Texas was annexed by the United States, in 1845 and Florida became a state.

Tyler is on my list (of notable presidents) for another event (that some day I might actually write the book). In February 1844, the Peacemaker cannon on the USS Princeton exploded, killing Tyler's Secretary of State, and the Secretary of the Navy. Also killed was David Gardiner (a Senator from New York), who daughter, Julia, was also on the boat. Julia and John Tyler were married in June 1844 (Tyler's first wife had died in the White House in 1842).

Posted by Brave Astronaut at 10:17 PM

What was the alleged infraction that brought about the impeachment resolution?

DD - from the White House Biography - "A year later when Tyler vetoed a tariff bill, the first impeachment resolution against a President was introduced in the House of Representatives. A committee headed by Representative John Quincy Adams reported that the President had misused the veto power, but the resolution failed."

Thanks, next time I'll check your links first. dd

Tyler is buried in Richmond's Hollywood Cemetery. Without peeking, name the other President buried there.

What's with the softball? I crush the ball to deep left with the answer of Mr. Monroe. But of course, one could also answer there is another president there - Jefferson Davis.

I love the Political Graveyard.

Always so much drama w/the Presidency! I feel like I'm watching a soap opera! *L*

BTW, I'll keep my same story for round 2 (over on the other blog.)