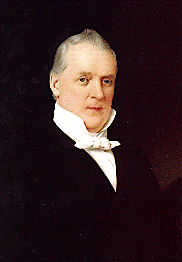 Today is Primary Day in the Commonwealth of Pennsylvania. It is appropriate that we have arrived at the 15th President on this particular day. For as Franklin Pierce was New Hampshire's only president, his successor, James Buchanan ranks as the only President from the Keystone State. Tomorrow marks the 217th anniversary of the birth of President Buchanan. He is also the only U.S. President who was never married (perhaps you've heard a rumor or two, but I'll leave that alone, I still need to work with J in PA).

Buchanan tried desperately to hold the Union together, but it fell apart as his presidency came to an end in 1860. A strict Constitutionalist, he tried with his appointments and legislative agenda to avoid civil war. The situation was note helped when the Dred Scott decision was issued by the Supreme Court (the Chief Justice of the Court was Roger Taney, who had a connection to Buchanan - does anyone other than J in PA know what it is?) two days after Buchanan took office.

Historians generally look upon Buchanan's failure to deal with the secession crisis as the worst presidential mistake ever made. With that and his other presidential achievements, leadership qualities, failures and faults (such as corruption), James Buchanan's ranking places him among the two or three worst Presidents in history (sorry J in PA).

The Facts
The Election of 1856
Trivia
Links

Posted by Brave Astronaut at 8:21 PM

Wheatland is very interesting and worth going to. Also interesting the reason we call the First Lady the First Lady is that Harriet wasn't his wife, and they needed something to call her. Or at least that's what they tell you on the tour.

*LOL @ the quote to Lincoln!* Charles has said that "anyone who wants to be President shouldn't be allowed to be President." He may be onto something...

Rather late making a comment. My apologies. Very bust week.

I take no issues with any of your statements. As president, not the best. Very arrogant, pompous, and egotistical, as a person. I think that was, in part, because of the ill treatment he felt he suffered because of his lower position when young - particularly by the man who might have been his father-in-law, had Coleman thought better of him. (Buchanan's psychology is far more interesting than his politics.)

And speaking of his politics, he was better at negotiating the political machine than being a leader. Which is why he finished poorly. Was a compromising legislator, not a decisive executive. Sadly he knew the problems of the nation would lead to disaster, but he couldn't overcome his egotistical desire to lead the nation - no matter how many times he said he didn't want it. Ironically, he is among the best prepared, in terms of other jobs held, for the office of president.

Oh, and as far as the Dred Scott decision, Taney wasn't the only other Dickinson alum on the bench. Grier was also an alum, and a signatory of the majority opinion. Author of the minority opinion was a Dickinson trustee. Small world.