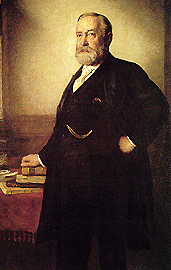 Benjamin Harrison, our twenty-third President, has a number of presidential trivia items in his favor. Notably during his administration, he sought to make several foreign policy successes, chief among them the formation of the Pan American Union, which later became the Organization of American States. Harrison also submitted a treaty to annex Hawaii, but his successor (and predecessor), Grover Cleveland, withdrew the plan. It was also during Harrison's administration that the Sherman Anti-Trust Act was passed (1890).

Although born and raised in Ohio, Harrison made his political mark in Indiana, where he lost a race for Governor, but later served in the United States Senate, where he helped to champion post-Civil War issues. As an Ohioan, he also graduated from Miami University of Ohio, known to archivists around the country. Harrison Hall, on that campus, holds the political science department. To date, he is the only President from the Hoosier State.

Harrison's wife, Caroline, died of tuberculosis in 1892, shortly before the end of Harrison's tenure. After the presidency, he returned to Indiana and married his second wife, Mary, less than four years after Caroline's death. She happened to be Caroline's niece. (All together now, EW! - I know what Mrs. BA is saying when she reads this, "Women grieve, men replace").

I read a fascinating book once about the wives of U.S. presidents; I can't remember the title, but I believe it was written by a Texan, published by (I think) Oxford University Press, and he did a great job. I remember reading this bit about the two Mrs Harrisons, and while part of me says Ewww, part of me recognizes the practicality of this. Harrison had obviously vetted his first wife's family and found them to his liking.

My father's father lost his first wife very early, when my grandfather was four. He remarried, choosing her younger sister. What I didn't realize until I looked into my genealogy was that he waited ten years to do this. When her sister died, she was still very young, and he wanted to make sure she was okay with it. I can't quite get over that. Clearly, my great-granddad and Mr Harrison had the same idea.

I have a colleague here who has been after me to talk more about the first ladies. They are such unique individuals in their own right. It is possible that I might have to profile them in the new year.