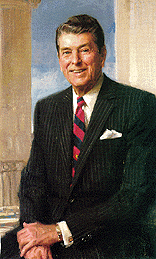 Our 40th President of the United States, Ronald Reagan, broke new ground in his rise to the presidency as well as during his administration. A Hollywood actor, Reagan was President of the Screen Actors Guild, when Hollywood began to look through its ranks for Communists. This helped to sharpen Reagan's conservatism that would define his political career. In 1966, he was elected Governor of California, and reelected in 1970.

Reagan sought the Republican presidential nomination twice (1968 and 1976) before finally securing it in 1980. In that election, Reagan buried incumbent Jimmy Carter in an electoral landslide. Four years later, Reagan was reelected with the highest number of electoral votes ever received by a candidate.

His presidency was defined by a series of domestic achievements supported by his policies of "Reaganomics." He is also remembered for firing the nation's air traffic controllers when they went on strike, which Reagan believed to be in violation of the Taft-Hartley Act. At the end of his eight years in office, Reagan had presided over the longest period of peacetime prosperity without economic recession or depression. Reagan made history when he appointed the first woman to the Supreme Court, Sandra Day O'Connor. Reagan also elevated William Rehnquist to Chief Justice and appointed Antonin Scalia to replace him.

In the foreign policy arena, Reagan ordered a withdrawal of American forces from Lebanon shortly after the deaths of 241 Americans in a bombing at the US barracks in Beirut. Two days after the bombing, Reagan sent US forces into Grenada to help sustain a pro-Western government in the Caribbean. Reagan also escalated the Cold War, which in turn helped to bring about its end. Part of his Cold War strategy was the development of the Strategic Defense Initiative, more derisively known as "Star Wars." The Iran-Contra affair also left a stain on the Reagan legacy, despite Reagan's denials that he was not aware of what was going on.

Posted by Brave Astronaut at 8:02 PM

Fortunately most Americans have short memories & few people realize the massive damage he did to our economy (among other things.)

Believe it or not, there is California couple from the McDonald's massacre has the name like Ronald Reagan! Ronald Hector Herrera and Blythe Regan Herrera!

Ronald Reagan has a Secretary of the Treasury with the similar last name as Ronald's: Donald Regan.