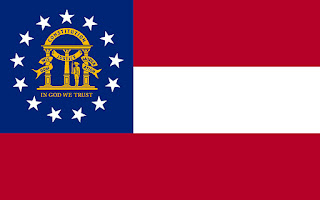 This week's entry is for the Peach State, the birthplace of good friend to the Brave Astronaut clan, OSG. Georgia is the first of the southern colonies to join the United States after the adoption of the Constitution. At the beginning of the United States Civil War, it seceded from the Union on January 21, 1861 and was one of the original seven states of the Confederacy. It was also the last state to be restored to the Union, on July 15, 1870. Georgia adopted its first Constitution in 1777 and has adopted new ones nine times since then. It is second only to Louisiana in number of Constitutions, which has had eleven.

I have been to Georgia a few times, specifically to Savannah (with OSG) to enjoy the many sights and culinary joys that exist in the city. There is one place in Georgia that I would like to travel - it's the Cathedral of golf, "A Tradition Like no Other." I speak of course of the Masters, the first major of the golf season, which always takes place in the first weekend in April.

One of my sisters is a HUGE fan of Gone with the Wind, which of course has a dramatic scene in Atlanta - home of Margaret Mitchell. Some day I would like to visit Atlanta, but I'm not entirely sure why. Atlanta is also home to Hartsfield-Jackson Atlanta International Airport, currently the busiest passenger airport in the world.

Georgia is also the home of the 39th President of the United States, Jimmy Carter, also a former governor of the state and a peanut farmer. The current governor of Georgia is, Nathan Deal, a Republican. Both of the Senators for the state are also Republicans, Saxby Chambliss and Johnny Isakson. The House delegation is currently split 8-5, in favor of the Republicans.
Facts
Links
Prominent Georgians (here are the hot button lists for this state - here and here. Discuss)

Posted by Brave Astronaut at 9:25 PM