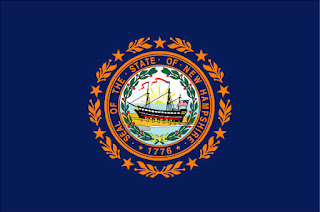 Our ninth state (and the third New England state) in our series is the Granite State, New Hampshire. I fully expect that Anna will have something to say here (I probably should have asked her to write this post), as she is a native of the state. Before Mrs. BA and I were married, we traveled to New Hampshire for Anna's wedding, traveling throughout New England and New York. Some day, I might tell you about Mrs. BA being kidnapped by nuns when we checked into the hotel for the wedding.

Most summers, the Brave Astronaut's family would travel to my grandmother's summer home in Maine. One highlight (?) of the trip was upon reaching New Hampshire was to count the bridges (overpasses, underpasses, etc.) on the New Hampshire Turnpike. The fine folks at the NH DOT were kind enough to number them. My mother always threatened to write the Governor, because for a few years the numbers were out of sync. There are also no rest areas on the short Turnpike. But there's something even better. State-run liquor stores.

New Hampshire holds a significant place in American politics. In case you hadn't noticed, the Granite State holds the nation's first presidential primary every four years. The state also has produced one President of the United States, Franklin Pierce, although Jed Bartlet is from New Hampshire, too. Democrat John Lynch is the current governor of New Hampshire. The two Senators for the Granite State are split ideologically, but both of them are women - Kelly Ayotte (R) and Jeanne Shaheen (D). The popular Shaheen is the only women in US History to be elected both as a Governor and a Senator. There are two House Members for New Hampshire and both are Republican.
Facts
Links
Prominent New Hampshirites (here's one list and another)

Posted by Brave Astronaut at 8:41 PM

I did not know that about the Peterborough library; very interesting. But you (and everyone!) should try to spend a weekend at the Mt. Washington Hotel. Fabulous! It was also the inspiration for Stephen King's _The Shining_, although not used for the movie. I'm pretty sure that Jed Bartlet was a better president than Franklin Pierce. Interesting Shaheen factoid, she was elected and reelected (and reelected) without ever signing "The Pledge," which promises not to create an income tax. (NH has no state income tax nor sales tax. But whoa, the property taxes!) One last bit and I'll stop, promise, New Hampshire's state liquor system seems to WORK (unlike Pennsylvania's say) because you can get a great price (people drive from all over New England to visit a NH store) and outstanding variety (unlike, say, Pennsylvania).

Anna - see? I knew you should have written this.