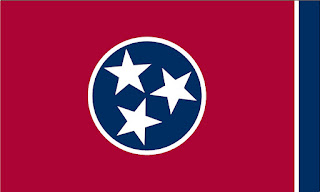 Tennessee is our next stop on our trip around the country. It is also the second state in a row (following Kentucky last week) that I have not been to, yet.  Tennessee was nearly admitted to the Union in the days following the American Revolution as the State of Franklin, but the admission was turned down by the Continental Congress.  Tennessee is the first state to be admitted to the Union that was territory that was under the direct control of the US Government.

Tennessee has a significant impact on the industrialization on the United States, with the Tennessee Valley Authority created in 1933 and Oak Ridge National Laboratory, which helped to build the nation's first atomic bomb in the 1940s.  The Grand Ole Opry in Nashville cements Tennessee's hold on the home country music in the United States.


Currently, the Governor of Tennessee is Bill Haslam, a Republican. Both of the Senators from Tennessee are Republicans, Senior Senator Lamar Alexander and the Junior Senator, Bob Corker. There are nine members in the Tennessee House Delegation, 7 Republicans and 2 Democrats.
Facts
Links

Prominent Tennesseans (here's a few lists to peruse, one, two, and three)

So noted and fixed. Copying and pasting sometimes gets me in trouble.