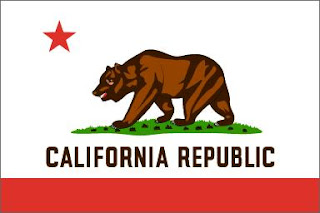 It is appropriate that we have reached California this week.  I am actually in the state, attending the SAA Annual Meeting in lovely San Diego.  I'm having a lovely time and (so far) the conference is informative.  And I had an amazing dinner last night with tableside Bananas Foster.

I have only been to the Golden State a few times but it is a great state.  Being in San Diego with its great weather, reminds me that I could live out here.  But it is also disconcerting to be three hours behind Mrs. BA and the boys back home.

The state of California has the lowest point in the nation, Death Valley, in the southeast, which is 282ft below sea level.  Mt. Whitney (14,491 ft) is the highest point in the contiguous 48 states.   Lassen Peak is one of two active U.S. volcanoes outside of Alaska and Hawaii; its last eruptions were recorded in 1917.

The State of California is the only state to have hosted both the Winter (Squaw Valley in 1960) and Summer Olympics (Los Angeles in 1932 and 1984).  California has nineteen major league sports franchises, more than any other state by far.  If California were its own country it would be the eighth largest economy in the world.

For being the most populous of all the states, it boasts only one native-born President, Richard Nixon.  His presidential library is located in San Clemente, where Nixon grew up.  Also found in California is the Illinois-born Ronald Reagan Presidential Library.  Gerald Ford also spent most of his post-presidential career in California.

The current Governor of California is Democrat Jerry Brown, a true character in American politics. The Senators for California are Democrats Dianne Feinstein and Barbara Boxer. The California Congressional delegation has 53 members, the largest of any state.  There are 34 Democrats and 19 Republicans.
Facts
Links
Prominent Californians- (here's a few lists to peruse, one and two)

Posted by Brave Astronaut at 2:48 PM

Email ThisBlogThis!Share to TwitterShare to FacebookShare to Pinterest
Labels: Conferences, Food, SAA, States of the Union