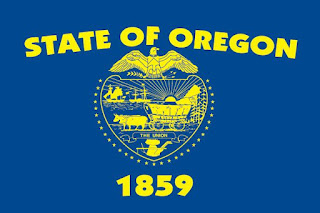 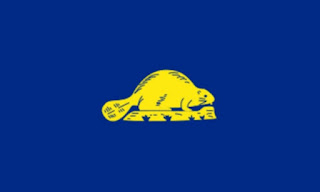 For the Beaver State - you get two flag images - because Oregon is the only state in the union that has something different on the reverse - an image of the beaver, the state animal!

They say that Virginia is for lovers - but Oregon was actually admitted to the Union on Valentine's Day, it must have been really loved by the US!

The state of Oregon was "discovered" by Spanish and English explorers in the 1500s and 1600s. Captain James Cook, while looking for the Northwest Passage charted some of the Oregon coastline in 1778. The Lewis and Clark expedition reached the Pacific Ocean from the Columbia River which traverses Oregon. Now, c'mon raise your hand if you have spent more time than you care to admit playing the Oregon Trail, which was one of the primary pioneer routes to the West. The state became prominent in the fur trade and John Jacob Astor's fur trading post, Astoria, was established in 1811. Today, Oregon is the leading producer of grass (the kind you walk on - not the kind you smoke), peppermint oil, and Christmas trees.  If one travels to Portland, you will find yourself in the US city with the most breweries in the country.

Oregon is a popular destination for Hollywood filmmakers as well - some of the movies filmed in Oregon include: Animal House, Free Willy, The General, The Goonies, Kindergarten Cop, One Flew Over the Cuckoo's Nest, and Stand By Me.

The current Governor of Oregon is Democrat John Kitzhaber. Both Senators for the state of Oregon are Democrats, Ron Wyden and Jeff Merkley. The Congressional delegation has five members, all of which are Democrats but one.
Facts
Links
Prominent Oregonians - (here's a few lists to peruse, one and two)

What, no mention of the Multnomah County archives and the Beaver Archivist?

OK, there's been an addition to the list of Prominent Oregonians.