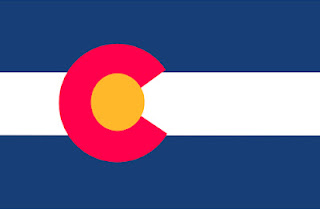 Colorado has the highest mean elevation of any state, with more than 1,000 Rocky Mountain peaks over 10,000 ft high and 54 towering above 14,000 ft. Pikes Peak, the most famous of these mountains, was discovered by U.S. Army lieutenant Zebulon M. Pike in 1806. Colorado's nickname of the Centennial State comes from its admission in 1876, the 100th anniversary of American independence.

The current Governor of Colorado is Democrat John Hickenlooper.  Both Senators from Colorado are Democrats, Michael Bennet and Mark Udall. The Colorado Congressional delegation has seven members (4 Republican and 3 Democrats).
Facts
Links
Prominent Coloradans - (here's a few lists to peruse, one and two)

Posted by Brave Astronaut at 8:16 PM

Hey Thanks for sharing this blog its very helpful to implement in our work.