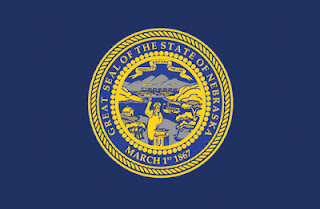 We've arrived at yet another state that was part of the Louisiana Purchase and which portions of eastern Nebraska were explored by Lewis and Clark.  The Oregon Trail cut across Nebraska.  Western Nebraska was acquired following following the Mexican War in 1848.  Omaha, Nebraska was the starting point for the Union Pacific on its transcontinental railroad journey.

Arbor Day was founded in Nebraska City by territorial governor J. Sterling Morton and the National Arbor Day Foundation is still headquartered in Nebraska City, with some offices in Lincoln. Kool-Aid was created in 1927 by Edwin Perkins in the city of Hastings, which celebrates the event the second weekend of every August with Kool-Aid Days. Cliffs Notes were developed by Clifton Hillegass of Rising City.  The city of Omaha is home to Berkshire Hathaway, whose CEO Warren Buffett is one of the richest people in the world.

There is a swing in the Hebron, Nebraska city park that claims to be the world's largest porch swing, long enough to fit 18 adults or 26 children (although one in Canada may be larger - and this one isn't on a porch). Nebraska Huskers football holds sway over much of the state, during home football games, Memorial Stadium in Lincoln, with a capacity of 85,500, becomes larger than Nebraska's third-largest city.

Nebraska is the only state in the Union to have a unicameral (one-house) legislature. Members are elected to it without party designation. Although this house is officially known simply as the "Legislature", and more commonly called the "Unicameral", its members call themselves "senators." Nebraska's Legislature is also the only state legislature in the United States that is nonpartisan. The senators are elected with no party affiliation next to their names on the ballot, and the speaker and committee chairs are chosen at large, so that members of any party can be chosen for these positions. The Nebraska Legislature can also override a governor's veto with a three-fifths majority, in contrast to the two-thirds majority required in some other states.

Nebraska is one of two states (with Maine) that allow for a split in the state's allocation of electoral votes in presidential elections. Under a 1991 law, two of Nebraska's five votes are awarded to the winner of the statewide popular vote, while the other three go to the highest vote-getter in each of the state's three congressional districts.

Although he made his mark in the state of Michigan, the 38th President of the United States, Gerald Ford, was born in Nebraska (as Leslie King) and the state is also the home of perennial presidential candidate and favorite son, William Jennings Bryan.

The current Governor of Nebraska is Republican Dave Heineman.  The Senators for Nebraska are Republican Mike Johanns and Democrat Ben Nelson.  Senator Nelson is retiring at the end of this Congress and the race to succeed him is fierce, with former Governor and Senator Bob Kerrey trailing Republican challenger Deb Fischer. There are three members of the Nebraska Congressional delegation, all Republicans.
Facts
Links
Prominent Nebraskans  - (here's a few lists to peruse, one and two)

Posted by Brave Astronaut at 9:12 PM