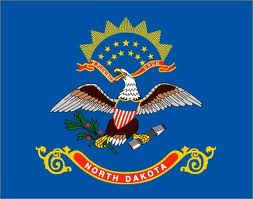 I could have combined this week and next week's post into one as we have arrived at the Dakotas.  The Dakota Territory was sparsely settled until the late 19th century, when railroads began to cross the territory.  An omnibus bill for statehood for North Dakota, South Dakota, Montana, and Washington titled the Enabling Act of 1889 was passed on February 22, 1889 during the first administration of Grover Cleveland. After Cleveland left office, it was left to his successor, Benjamin Harrison, to sign proclamations formally admitting North and South Dakota to the Union on November 2, 1889. The rivalry between the two new states presented a dilemma of which was to be admitted first. Harrison directed Secretary of State James G. Blaine to shuffle the papers and obscure from him which he was signing first and the actual order went unrecorded, thus no one knows which of the Dakotas was admitted first. However, since North Dakota alphabetically appears before South Dakota, its proclamation was published first in the Statutes At Large. Since that day, it has become common to list the Dakotas alphabetically and thus North Dakota is usually listed as the 39th state.  So this week North, next week South (and then Montana and Washington - the other 1889 Enabled states).

In 1803, the U.S. acquired most of North Dakota from France in the Louisiana Purchase. Lewis and Clark explored the region in 1804–1806. In 1818, the U.S. obtained the northeast part of North Dakota by treaty with Great Britain. North Dakota is the most rural of all the states, with farms covering more than 90% of the land.

North Dakota is the only US state that legally demands its pharmacies to have 51% shares owned by pharmacists. This is the reason typical locations, such as Wal-Mart, Target, Walgreens, and other national chains are unable to fill prescriptions in their stores.  North Dakota is considered the least visited state, owing, in part, to its not having a major tourist attraction.  Along with having the most churches per capita of any state, North Dakota has the highest percentage of church-going population of any state.