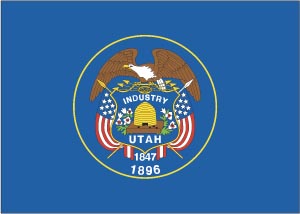 In 1890, Wilford Woodruff, president of the Mormon Church published his Manifesto reforming political, religious, and economic life in Utah. This led to the admission of Utah as the 45th state in 1896. The first (148) Mormon pioneers had arrived in the Utah territory in 1847. Brigham Young was named as territorial governor by President Millard Fillmore in 1850. Controversy soon arose when word reached Washington that Mormon leaders were disregarding federal law and engaging in polygamy. Young was removed as governor in 1857 by President James Buchanan and sent troops to Utah. After Woodruff's Manifesto renounced the practice of polygamy, the stage was set for Utah to become a state. Utah is the most religiously homogeneous state in the Union. Approximately 63% of Utahns are reported to be members of The Church of Jesus Christ of Latter-day Saints or LDS (Mormons), which greatly influences Utah culture and daily life, and it is the site of the Salt Lake Temple.

The first transcontinental railroad was completed with the driving of a golden spike at Promontory Summit in 1869. Utah is the only state that produces gilsonite, a pure form of asphalt used in dark colored printing inks and paints, oil well drilling muds and cements, asphalt modifiers, foundry sands additives, and a wide variety of chemical products.  Utah is a popular vacation destination, with 11,000 miles of fishing streams and 147,000 acres of lakes and reservoirs.  Salt Lake City hosted the 2002 Winter Olympics.

The current Governor of Utah is Republican Gary Herbert, who was reelected on November 6.  The Senators for Utah are also both Republicans, newly reelected Orrin Hatch and the junior Senator Mike Lee. The  Congressional delegation now has four members (having picked up a seat in the decennial census redistricting).  Reps. Bishop, Chaffetz, and Matheson were all reelected.
Facts
Links
Prominent Utahns - (here's a few lists to peruse, one and two)

Jell-O's the state snack? I guess they're lucky it's not a Twinkie, eh?

Please I still can't talk about the loss of the Twinkie.