Combining my love of raspberries and the blondie. From Sweet Peas and Saffron via BuzzFeed.

Cream Cheese Layer
In a medium bowl, beat cream cheese and sugar until smooth and no lumps remain.

Beat in the egg and vanilla, scraping down sides of bowl occasionally.

Allow the butter to simmer gently for 5 or so minutes to brown it. Keep an eye on the butter, as it can go from golden to burned very quickly. As the butter browns, stir frequently, and you will see small brown bits coming off the bottom of the pan.

Pour the browned butter into a large bowl and add the sugar, mixing completely. Allow it to sit 5 minutes or so to cool, before stirring in the egg and vanilla.

Stir in the flour until completely combined.

Raspberry Swirl
Heat the jam in the microwave for 10 seconds, then stir until smooth.

Assembly:
Spread ⅔ of the blondie batter over the bottom of the prepared pan.

Add dollops of the cream cheese mixture randomly over the blondie base.

Add teaspoons of the raspberry jam randomly over the blondie base.

Spread (as best as you can) remaining blondie over the cream cheese and raspberry jam.

Gently run a knife along the length of the pan to swirl the mixture. As you can see from my photos they won't look very pretty at this point, however they will be much prettier when they come out of the oven!

Bake for 20-25 minutes until center is set (it shouldn't jiggle). Mine was perfect in 23 minutes.

Allow to cool completely in the pan before cutting into bars.

Store in the fridge for up to 5 days.
Posted by Brave Astronaut at 11:40 PM No comments:

When I'm interested in comfort food I will usually go for my Mom's Beefaroni.  Leave it to the one woman that I might consider leaving Mrs. BA for to provide me with an alternative. Via the Pioneer Woman.

Instructions
In a bowl, mix together the sausage, beef, oats, 1/2 of the Parmesan, egg, half the parsley, and salt and pepper until well combined. Form into small meatballs (about 1/2 inch) and brown in batches in a skillet over medium heat. Remove the meatballs from the pan and drain.

Add the onions and garlic to the skillet and cook for 3 to 4 minutes, stirring occasionally. Add the tomatoes with juice, tomato paste, salt and pepper, sugar, and water. Stir and bring to a simmer, then add in the meatballs and continue simmering for 20 minutes. Remove the skillet from the heat and allow it to cool. Stir in the basil once cool.

In a casserole dish, add half the pasta, half the mozzarella cubes, 1/4 cup Parmesan, and half the meatball sauce. Repeat with another layer, ending with the meatball sauce. Cover with foil and either refrigerate for up to 2 days, or bake in a 350 degree oven for 20-25 minutes. Serve piping hot!
Posted by Brave Astronaut at 11:38 PM No comments:

The Brave Astronaut Clan is on vacation this week - so there is sure to be some vacation cereal in the beach house - probably Cap'n Crunch or maybe Fruit Loops.  Maybe if SoBA and LBA and their friends don't eat them all, we can make these this week.  From the Pioneer Woman.

Instructions
Put the flour in a shallow bowl and add some salt and pepper. Put the egg in a second shallow bowl. Crush the cereal in a third bowl, leaving a few larger chunks.

Dip the chicken strips first in the flour, then the egg and then the cereal.

Heat 1/4 inch of oil in a large skillet over medium heat. Cook the strips in batches until golden brown and cooked through, 5 to 7 minutes, turning them so they don't burn. Drain on paper towels and sprinkle with extra salt. Serve with ketchup!
Posted by Brave Astronaut at 12:22 PM No comments:

Today is Mrs. BA's birthday - she's hit the 1/2 century mark. I am more and more in love with her every single day.  She is the best wife and mother.  If you see her around today, make sure you wish her a happy birthday.

Tonight we will gather at the pool (her favorite summer place) to celebrate with friends.  Tomorrow we leave for vacation. 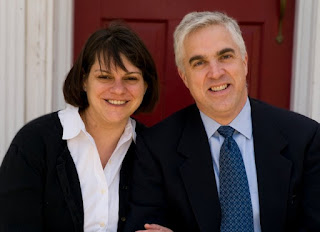 Doesn't she look great?  And I'm the one younger than she is?

FYI - dear readers, I am unplugging for the week while on vacation.  I am in need of a respite from technology for the week.  I plan to do as little as possible, except sit on the beach, swim in the ocean, and relax.  No Facebook, no games on my phone or other devices.  I'll be back soon!
Posted by Brave Astronaut at 7:41 AM No comments:

The Brave Astronaut Clan is heading out for some much needed vacation time.  No, not to Vacationland again this year - we're staying a little closer to home, but still beach bound.

I have always wanted to drive cross country and hit all the sites along the way.  Some day, I will do this.  I have wanted to do this for years.  And hey, you can't tell me that science is wrong.

According To Science, This Is The Perfect And Best Road Trip You Can Possibly Take
(via shareably)
Be honest with yourself: at some point you’ve probably thought about going on a cross-country road trip. Whether it be driving across Canada, United Kingdom, United States, or wherever you’re from, it’s probably crossed your mind at some point.

Luckily, for those in the United States, the “perfect road trip” has finally been planned.

According to the algorithm - it hits all the biggies.  Those that I would be able to take off this list (as I've already been there) - are in bold.

Posted by Brave Astronaut at 8:17 PM No comments:

Email ThisBlogThis!Share to TwitterShare to FacebookShare to Pinterest
Labels: Lists, On the Road, Travel, Vacation

Posted by Brave Astronaut at 11:37 PM No comments:

One of my favorite dishes my mother made growing up was her version of chicken cacciatore.  She would brown some chicken pieces and then smother them in some tomato sauce and serve it up.  Tonight LBA, SoBA, and I had breakfast for dinner (though we were going to have meatloaf until I realized we only had one pound of ground beef in the house).  In learning that I discovered that we need to eat out of the freezer for a while - there's too much in there.

So time for some chicken dishes.  From Cafe Delites, via BuzzFeed.

Posted by Brave Astronaut at 11:33 PM No comments: