Posted by Brave Astronaut at 9:01 PM No comments:

Two weeks ago (yes, I'm aware I didn't post one week ago), I posted a recipe about Chicken and Asparagus.  Asparagus is one of those vegetables that I enjoy, but as I learned to eat them from my father, I prefer cold, with a hollandaise sauce (actually just mayo and Italian dressing).  I spotted this recipe in the Washington Post Food Section and think I might give it a try.

Asparagus With Avgolemono Sauce
Avgolemono is a lusciously silky, brightly citrusy Greek sauce made with egg and lemon juice that can be drizzled liberally over anything from vegetables and poultry to fish. It takes just 5 minutes to whip up, and it’s healthful to boot. Here, it turns simple steamed asparagus into a truly elegant dish.
Make Ahead: The sauce can be refrigerated a day in advance.
Servings: 4 servings

Directions
Bring about 2 inches of water to a rapid boil in a large pot fitted with a collapsible metal steamer.

Heat the broth in a medium saucepan over medium heat; once it bubbles at the edges, reduce the heat to low.

Whisk the egg in a medium bowl until foamy, then add the lemon juice and cornstarch, whisking until incorporated. Gradually add 2 tablespoons of the hot broth to the egg mixture, constantly whisking to incorporate.

Pour the tempered mixture into the saucepan with the remaining broth (over low heat); cook, stirring constantly for about 3 minutes, to form a lightly thickened sauce. Remove from the heat, stir in the salt and cover to keep warm.

Place the asparagus spears in the steamer basket, cover and steam for 3 to 6 minutes (depending on their thickness), until crisp-tender.

Serve the asparagus drizzled with the sauce and garnished with the parsley leaves.
Posted by Brave Astronaut at 8:57 PM No comments: 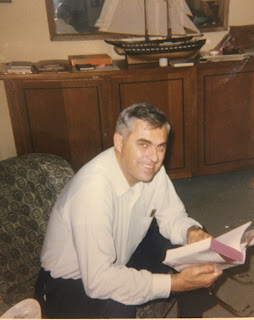 On Monday, April 3, 2017, my father left this world for the next. His journey ended just days after a diagnosis of leukemia. My father was not a patient man, so my siblings and I all agreed that once he was presented with this diagnosis, he was going to get on with it. We would have liked more time with him, but we were blessed with 87 good years. The picture above shows him at 40 years of age - I found the picture about 10 years ago and was immediately struck by how much I looked at him. For many years, I had thought that I favored my mother's side of the family - but there was no denying that he was my father. The picture shows my father in his element, a book in his hands (though there is likely a glass of scotch close by and probably a cigarette burning in an ashtray) and the model ship in the background is one that he surely made, a lifelong devotion of his, making models, and painting lead soldiers. 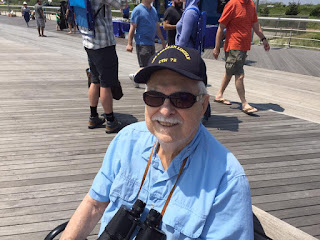 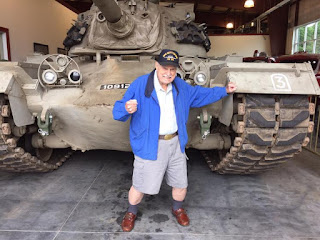 This picture to the left shows my father at the Jones Beach airshow, just last summer. My father was not a veteran - but loved war movies, military history, and history in general. Below is a picture of my father at a tank museum that my siblings and I took him to, also just last summer. He made many a model of tanks - and there are many, many models of tanks that he never got to build. Maybe I can get LBA and SoBA in model building.

My mother passed away 11 years ago, this past February, and I am sure that he is back with her now. My mother firmly believed that when you got to heaven, you got to be whatever age you wanted and I hope for his sake, she is about 20 and he is the same. They were married for 53 years and raised four children - I am the youngest of all of us. He was also the proud grandfather of eight, LBA and SoBA, along with three children from my brother and sister. He also became a great grandfather just in the past few years.

For the past nine years, he was blessed to have found a companion who took care of him as much as he took care of her. While she could never replace my mother, he found love a second time, and my siblings and I were grateful that she was in his life. 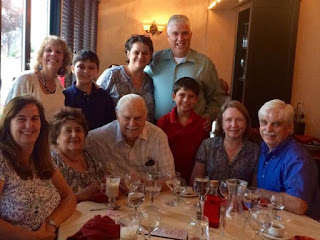 My father spent his professional life on Madison Avenue. He was a Mad Man, before any of us knew what a Mad Man was. He started working at American Home Products, which later became Wyeth, before being bought by Pfizer, in pharmaceutical advertising. He later left AHP to go over to the advertising side exclusively, ending his career at McCann-Erickson. He really enjoyed watching MadMen, as we all did - and we looked forward to talking to him about the latest episode after it aired.

I can't begin to express my thanks to all of those who have supported me and my family over the past week - so many messages of love and support have come to us through Facebook, texts, phone calls, and emails. When we sent my father home on Thursday morning, my brother offered some words of remembrance about my father, quoting Napoleon, one of my father's favorite historical figures, by saying, "What is history but a fable agreed upon?" He offered several stories about my father, which my siblings and I all contributed to, and also included the words of the "Chairman of the Board":


"I’ve lived a life that’s full
I’ve traveled each and every highway
But more, much more than this,
I did it my way."

Thanks Dad for everything.  Rest well, you've earned it.  We all love you and miss you - but we know that you are always with us.

Posted by Brave Astronaut at 9:28 PM No comments:

I'm always on the hunt for easy dinners. By the time we all get home - one moment of indecision can lead to dinner on the table by 7:30 or later. We use the crock pot when we can - but the dinner in 30 minutes or less is always welcome. From A Saucy Kitchen via BuzzFeed.

Posted by Brave Astronaut at 9:03 PM No comments: