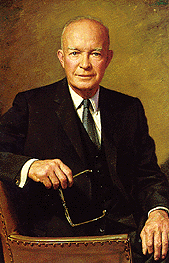 I'm off tonight for a few days of rest and relaxation at the beach. I have a few posts scheduled to keep you up to date while I am away as I am not sure what my connectivity will be at the beach. Happy Labor Day weekend to all and enjoy the Democratic Convention!

Dwight David Eisenhower came to the presidency without having held an elective office. A career military man, Eisenhower was Commander of NATO Forces in Europe when Republican party officials came to him in Paris to persuade him to run for President in 1952.

Born in Texas, but raised in Abilene, Kansas, Eisenhower received an appointment to West Point. When World War II broke out, Eisenhower became Supreme Commander of the Allied forces in Europe and oversaw the invasion of North Africa and the D-Day invasion in June 1944. After being elected President, Eisenhower presided over the truce signing in 1953, ending the Korean Conflict.

Domestically, Eisenhower is credited with the establishment of the Interstate Highway System. He also created the Department of Health, Education, and Welfare, now divided into the Departments of Health and Human Services and Education. Eisenhower appointed five justices to the Supreme Court, including the nomination of Earl Warren as Chief Justice. During his administration, NASA was also created.

In September 1955, Eisenhower suffered a severe heart attack. He spent several weeks in a hospital and doctors pronounced him healthy enough to return to work in February 1956. He was reelected in November of that year. He retired from the presidency to his farm in Gettysburg, Pennsylvania and died at Walter Reed Hospital in Washington, DC in March 1969.

Posted by Brave Astronaut at 8:52 PM

Email ThisBlogThis!Share to TwitterShare to FacebookShare to Pinterest
Labels: The American President, Vacation

Anna - Such good historically-minded women you are.

Here is the internet's BEST and most informative webpage about Dwight Eisenhower's background as a Jehovah's Witness. This article has been regularly posted on multiple and various websites, particularly EBAY, since 2003.

This is where most other authors get their fine point details.