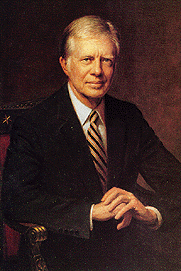 Our 39th President, Jimmy Carter, served only one term in the White House, but looked as if he had spent a lifetime in the office. It is said the presidency ages a man, but for Carter, he suffered most prominently from the pressures of the office. Tomorrow, on October 1, Carter will turn 84 years old.

Carter, a peanut farmer from Georgia, graduated from the United States Naval Academy and served in the Navy for seven years. He entered politics in 1962 and was elected Governor of Georgia in 1970. Four years later, Carter announced he was running for President and defeated President Ford in the 1976 election.

Carter's administration had many successes, but the economy continued to struggle under his administration, causing him to focus on righting the economic ship. When he left office, his administration could point to an increase in jobs and a reduction in the national deficit. Carter also faced an energy crisis and developed a national energy policy to combat fuel shortages. Carter also established the Department of Education as a separate agency, which had previously been under the aegis of the Department of Health, Education and Welfare, along with the creation of a Department of Energy. Although staunchly pro-life, Carter became the first President to support legalized abortion, established in the Roe v. Wade decision in 1973.

In foreign affairs, Carter was one of the most successful of modern presidents, when he brought Anwar Sadat of Egypt and Menachem Begin of Israel to the peace table and got them to sign the Camp David Accords in 1978. He also established full diplomatic relations with the People's Republic of China, signed the SALT II treaty with the Soviet Union, and negotiated the treaty that returned the Panama Canal to Panama at the end of the 20th Century.

The SALT II treaty was not ratified by the United States when the Soviets invaded Afghanistan, which also led the United States to boycott the 1980 Olympic Games in Moscow. Most damaging to Carter's presidency however, was the taking of fifty-two American hostages at the U.S. embassy in Tehran, Iran. The hostages were held for 444 days and were released on January 20, 1981, the day that Ronald Reagan was sworn in as the 40th President of the United States.

Posted by Brave Astronaut at 8:55 PM

One of my favorite quotes is from Carter (who I liked when I was a kid & still have much respect for); "Penalties against possession of a drug should not be more damaging to an individual than the use of the drug itself."

Cathy was mocking me a few months ago for having the audio book of A Remarkable Mother playing in the car when we were on our way to lunch. "How can you stand to listen to him read this?! It would drive me crazy!"

I kind of enjoyed it, though. It was toward the beginning of this kick I'm on: Getting autobiographical items read by their authors. First up was Steve Martin, then Jimmy Carter, and I just finished Julie Andrews. Now her accent started to work my nerves after about disc 5.

I don't know who's next on the list, though. Any suggestions?

Lana - so I guess you are no big fan of the "Rockefeller Drug Laws"?

Amy - I can't quite get into the audiobook thing. It is the same way that I have to actually read a newspaper, rather than read it online.