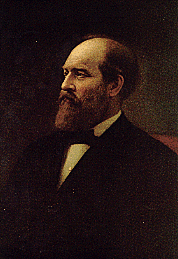 I am rapidly coming to the conclusion that I must have been a 19th Century Ohioan in a former life, because I have this affinity for these Ohio Presidents. James Garfield, our 20th President, is also the second president to be cut down by an assassin's bullet.

In 1862, Garfield was elected to the House of Representatives. At the time, Garfield was serving in the Union forces as a brigadier general. President Lincoln asked him to resign his commission, he was needed more in Congress than in the army. Elected for another eighteen years, Garfield became one of the most powerful Republicans in the House.

In 1880, Garfield went to the Republican Convention to try and secure the nomination for his friend and colleague, John Sherman. Thirty-six ballots later, Garfield became the dark horse nominee. Oops. Sherman, however, did get a prize out of it. The Senate seat that Garfield was also elected to (that was the job he really wanted) at the same time he was elected President, went to Sherman.

In his brief time in office (the second shortest administration, after William Henry Harrison), Garfield took on the powerful machine of Senator Roscoe Conkling of New York. Garfield fought the corruption and patronage advanced by Conkling, and emerged victorious when Conkling resigned from the Senate in protest, thinking he would be reappointed by the New York legislature. Oops. They missed that memo and appointed someone else.

As Garfield walked through the Sixth Street Station in Washington, DC (the spot is now occupied by the National Gallery of Art), he was approached by Charles Guiteau, who was disgruntled with the Garfield administration as he had been thwarted in securing a federal position. Walking with Garfield was Robert Todd Lincoln, notching his second of three direct associations with presidential assassinations. Garfield lingered for more than four months before succumbing in September 1881. It is widely believed that he would have survived had his doctors been more capable.

The Facts
The Election of 1880
Trivia
Links

Posted by Brave Astronaut at 10:26 PM

As a proud Ohioan, I feel the need to make a witty comment about your imaginary past life as an Ohioan, but nothing's coming to me.

I've been by Lake View Cemetery many a time, but never in it. Once upon a time (that would be the summer of 2003), a friend of mine and I were going to go see Spoon River Anthology performed there. However, we ended up seeing it at one of the other cemeteries instead because it was closer to home.

The performance was pretty cool, actually. You can still read about it on Scene magazine's Web site:

Hey, Ohio is a kicka** state. It might even swing the right way come November.

I thought of you yesterday when I was out on the east side and passed the "Welcome to Mentor: Home of President James A. Garfield" sign.

At the time I didn't know exactly where his house is, but now that I look at the map, I see that at one point I was about a block away.

I was on my way to a wine tasting, though, so I kind of had my mind on other things. My new favorite wine (aka my only favorite wine) is Gazela Vinho Verde, mainly because it was described to me last night as "the beer drinker's white wine."

While it does come relatively cheaply, and with a screw-top cap to boot, it's not half bad. Especially after a few Millers, ha ha. (Another joke from last night.)


More info, if you're in the least bit curious:
http://www.wineloverspage.com/wineadvisor2/tswa20070907.php