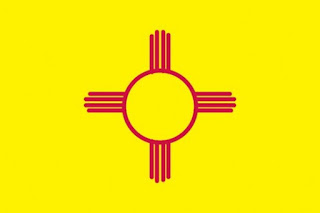 New Mexico became a territory of the United States following the Mexican War in 1848, with the last piece of the puzzle coming with the 1853 Gadsden Purchase. Since 1945, New Mexico has been a leader in energy research and development with extensive experiments conducted at Los Alamos Scientific Laboratory and Sandia Laboratories in the nuclear, solar, and geothermal areas.

The state of New Mexico has the highest percentage of Hispanics and the second highest percentage of Native Americans (after Alaska).  The tribes in the state consist of mostly Navajo and Pueblo peoples. The flag of New Mexico is represented by the red and gold colors, which represent Spain, as well as the Zia symbol, an ancient symbol for the sun of that Pueblo-related tribe.

The current Governor of New Mexico is Susana Martinez, a rising star in the Republican Party and the first Hispanic female governor of a state. Both Senators for New Mexico are Democrats, Jeff Bingaman, and Tom Udall. Senator Bingaman is retiring from the Senate and will be replaced by Congressman Martin Heinrich (D).  The New Mexico Congressional delegation has three members, two Democrats and one Republican.
Facts
Links
Prominent New Mexicans - (here's a few lists to peruse, one and two)

Posted by Brave Astronaut at 8:53 PM