So we are halfway home (so to speak). Please enjoy the video above of a drive around the country as we discuss our next state. 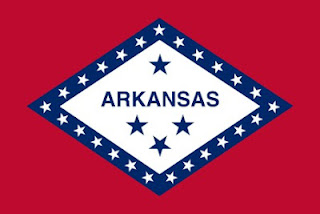 We've arrived at the home of the 42nd President of the United States, Bill Clinton. A note about the Arkansas flag: the diamond represents the only place in North America where diamonds have been discovered and mined. The twenty-five white stars around the diamond indicate Arkansas's status as the 25th state, while the single star over "Arkansas" denotes the state's membership in the Confederacy. The other three stars represent Spain, France and the United States, countries that had earlier ruled the land that includes Arkansas.

Arkansas was a reluctant participant in the US Civil War joining the Confederacy late (it was a slave state) and promptly found the majority of its territory occupied by Union troops.  During the war for Texas, the region, which shared a border with Texas, had many soldiers passing through Arkansas on its way to secure Texan independence.

Arkansas later became a flashpoint in the Civil Rights struggle when Governor Orville Faubus [who served as Governor longer than any other individual] attempted to block the integration of Central High School in Little Rock in 1957.  The school was to be desegregated as part of the landmark decision, Brown v. Board of Education of Topeka Kansas, handed down in 1954.  Nine students were enrolled at Central and angry crowds prevented them from entering the school.  Faubus called out the Arkansas National Guard to bar their entry.  Local police took the students to safety and President Eisenhower federalized the National Guard to allow the students to enter.  Little Rock schools closed for a year and then reopened with limited integration.  Faubus's showdown with Eisenhower did help him in Arkansas, he was reelected Governor four more times.

Two weeks in a row we have arrived at a presidential producing state, as noted above, Bill Clinton hailed from Hope, served as Governor of the State, and his Presidential Library was established in Little Rock. The current Governor of Arkansas is Democrat Mike Beebe. Arkansas' Senators are separated by the ideological aisle, Democrat Mark Pryor and Republican John Boozman. Here's an interesting trivia question to see how many people are paying attention (and reading these posts) - How many of the fifty states have split Senators, that is one from each party?  The Arkansas Congressional Delegation is only four strong, three Republicans and one Democrat.
Facts
Links
Prominent Arkansans / Razorbacks - (here's a few lists to peruse, one and two)

Answer to the question above - 17, now name them (the states, not the Senators).
Posted by Brave Astronaut at 10:00 PM

Crap! Now I have Glen Campbell songs as earworms.

C - There are worse songs, I suppose.