Mrs. BA is one to order fish and chips if it's on the menu. Her usual follow-up question is if they are made in house, she's a stickler. Maybe I can put these on the menu at the Launchpad.  Thanks to Simply Recipes for the recipe.  I might even get SoBA to eat it.  Now to put tartar sauce on the Wegman's list.

Posted by Brave Astronaut at 8:11 PM No comments: 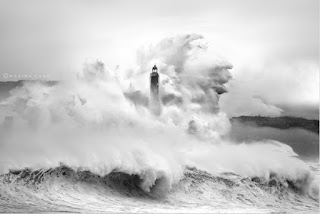 The Brave Astronaut has a thing for lighthouses. In fact on our recent trip to Legoland, I may have bought this. As we all seek shelter in a port away from the storm - here are some lighthouse photos to soothe you.

Or maybe you're looking to get away from it all - and you want to go and live in a lighthouse?  It may not be the life you think it is.  Read more here.

If you live here in the DMV, maybe you'd like to visit some of the local lights.  Here's a list.

Posted by Brave Astronaut at 8:23 PM No comments:

Cupcakes are perfect!  These would be problematic for the best way to eat cupcakes however, which is to make cupcake sandwiches.  From Cooking Classy via BuzzFeed.

Directions
For the pastry cream:
In a medium saucepan, heat heavy cream, milk, 6 Tbsp sugar, salt and seeds of 1/2 vanilla bean along with vanilla bean pod over medium heat. Bring mixture just to a gentle bubble, stirring occasionally (remove from heat as necessary to prevent vigorous boiling while preparing remainder). Meanwhile, in a mixing bowl, whisk together egg yolks and 2 Tbsp sugar until well blended. Add cornstarch to egg yolk mixture and mix until very well combined and and slightly pale and fluffy. Take about 1/2 cup of the hot cream mixture from pan, and while vigorously whisking, slowly pour hot cream mixture (about 1 Tbsp at a time) into egg yolk mixture. Reduce burner temperature to medium-low. Then, while whisking hot cream mixture in saucepan, slowly pour egg yolk mixture into hot cream mixture in saucepan. Cook mixture, whisking constantly, until thickened (allow it to boil for about 30 seconds to cook out starchy flavor). Immediately force mixture through a fine mesh strainer into a bowl. Mix in 1 Tbsp butter. Cover with plastic wrap pressing directly against surface of custard. Chill thoroughly, about 2 hours.

For the cupcakes:
Preheat oven to 350 degrees. In a mixing bowl, whisk together flour, baking powder and salt for seconds, set aside. In the bowl of an electric stand mixer fitted with the paddle attachment, whip butter and granulated sugar until pale and fluffy. Mix in egg then blend in egg whites and vanilla. Add 1/2 of the flour mixture and blend just until combined, then add milk and blend just until combined and finish adding in remaining 1/2 flour mixture and blend just until combined. Divide batter among 12 paper lined muffin cups, filling each cup about 2/3 full. Bake in preheated oven 21 - 24 minutes until toothpick inserted into center of cupcake comes out clean. Transfer to a wire rack to cool completely.

To assemble cupcakes:
Pipe or spread chilled pastry cream over cooled cupcakes into an even layer. Working with one cupcake at a time, sprinkle entirety of pastry cream with sugar then heat with a kitchen torch until sugar begins to melt and caramelize (I would first coat the edges of pastry cream while rotating the cupcake, then sprinkle tops, then I would torch it and add another layer of sugar. I just found working in layers worked best so it didn't all bead up and just run off the sides, but just experiment and see what works best for you. I used about 1 - 1 1/2 tsp sugar per cupcake). Allow topping to cool then garnish with whipped cream and a raspberry if desired. Serve immediately (note: the pastry cream can be made the day before and the cupcakes can be made hours ahead of time but top with sugar and caramelize sugar just before serving).

Just a few days after the election last November, Mrs. BA and I agreed that we could not be in the DC area on January 20.  So we've bugged out for the weekend.  The Brave Astronaut Clan has gone to Florida and are today at Legoland and headed to Universal Studios Saturday and Sunday.  Monday we will take in Cape Canaveral before flying home.

Later I'll figure out how to walk through the lobby of my building every day, where a portrait of the President hangs on the wall.  For the moment I will look back at this.  And I'll read this.  I'll be listening to this.

And if you're wondering - Jed Bartlet is still my President.

Posted by Brave Astronaut at 12:00 PM No comments:

Email ThisBlogThis!Share to TwitterShare to FacebookShare to Pinterest
Labels: About Me, Movies, Television, The American President, Video

Pepperoni Pizza is a big favorite on pizza night at the Launchpad.  SoBA would eat his weight in pasta (and peas) if given the chance. (Parenthetically, when did LBA and SoBA phase out of the McDonald's Happy Meals in favor of a 20-piece chicken nuggets and a Quarter Pounder meal?)

Here's another one-pot recipe that should please the diners at the Launchpad. Via A Night Owl blog, from BuzzFeed.

Evidently January 11 is National Hot Toddy Day.  And now that I'm a fan of the sweet brown liquor, I might have to start having these.  I'll keep the colds away and feel all warm inside at the same time.

If you're out and about in DC, you can find hot toddies in several spots around town.  See this article from DCist for more information. If you're interested in having them in your own home, try this recipe.

Ingredients
Preparation
Put bourbon, honey, and lemon juice in a 6-ounce mug. Top off with hot water and stir until honey is dissolved.
Posted by Brave Astronaut at 8:54 PM No comments:

LBA (and Mrs. BA) really love the Baked Potato Soup.  I bet this would make everyone feel good.
From Gimme Some Oven via BuzzFeed.

Ingredients
Directions
*You can either fry the bacon, cook it in the microwave, or buy pre-cooked bacon. If frying or microwaving, I recommend dicing the bacon before cooking it. And if you are frying it, I highly recommend saving the bacon grease for later and then using it to make your roux (instead of butter).

**I highly recommend using Yukon gold potatoes, which have the perfect texture and buttery taste for this soup. But Russet potatoes or red potatoes would also work just fine in this recipe.

***If you would like to make this recipe vegetarian, use vegetable stock, omit the bacon, and I would recommend adding in 2-3 teaspoons of Old Bay seasoning for extra flavor.

Posted by Brave Astronaut at 11:58 AM No comments: