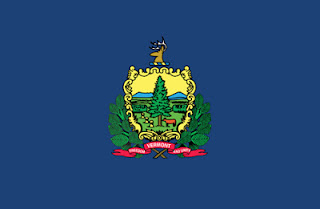 Today's post is the first state to join the union that was not part of the original thirteen colonies. Although, in this case, that's only partly true. Vermont was part of New York and New Hampshire before being made into its own state. Vermont played a significant role in the American Revolution when Ethan Allen and his Green Mountain Boys staged a raid on Fort Ticonderoga on the New York side of Lake Champlain (which lies between the two states). Vermont is the only New England state that does not border the Atlantic Ocean.

Vermont is the leading producer of maple syrup in the United States. Just don't tell Jed Bartlet. During the US Civil War, the state of Vermont saw the northernmost battle site with the St. Albans Raid. I've been to Vermont on a few occasions, vacationing in Woodstock, visiting the best ice cream factory ever in Waterbury, Robert Frost's grave in Bennington (and the Revolutionary War Monument), and Calvin Coolidge's birthplace and home in Plymouth Notch.

For a small state, it has produced two U.S. Presidents, Chester A. Arthur and Calvin Coolidge.

The Governor of Vermont is Peter Shumlin, a Democrat. Vermont elects its Governors for two-year terms. The Senators from Vermont are Patrick Leahy, a Democrat and Bernie Sanders, an Independent who caucuses with the Democrats. Vermont has only one At-Large Representative, Democrat Peter Welch.

Facts
Links
Prominent Vermonters (here's a few lists to peruse, one, two, and three - sorry C in DC, very few women to be had from here)

Good op for trivia. If Vermont is VT why is the University of Vermont abbreviated as UVM? Or does everyone know that? (UVM was the first college I was accepted to.)

How about Pearl S. Buck? or Ida Fuller - the first person to receive Social Security?

Given your love of all things musical, I'm surprised you didn't mention the von Trapps.

OK, I cheated and googled the answer. Its UVM for the school motto, "Universitas Viridis Montis" or "University of the Green Mountains.

C - Pearl Buck and the vonTrapps are not native Vermonters. Ida Fuller was an oversight.