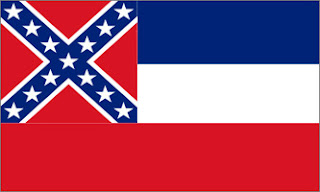 Our next state is one that almost any child can spell, even if they don't live there.  It's one of the easier states to learn how to spell, with all those repeating letters M - ISS - ISS - IPP - I.  Plus everyone knows that it takes a full second to say the state (one - mississippi, two - mississippi, three - mississippi).  Mississippi has deep roots across several genres of American Music, specifically the blues, jazz, gospel music, and rock and roll.

Mississippi was organized as a territory following the American Revolution, carved out of land ceded by Georgia and South Carolina.  At the outbreak of the Civil Way, Mississippi became the second state to secede from the Union and was a founding member of the Confederacy.  The state suffered the largest percentage of people who died in the Civil War of any Confederate State. 78,000 Mississippians entered the Confederate army. By the end of the war 59,000 were either dead or wounded.   It rejoined the Union in 1870.

Mississippi has been slow to react to laws that were widely adopted elsewhere in the US.  In 1966, it was the last state to officially repeal prohibition, which had been overturned with the ratification of the Twenty-third amendment - in 1933.  In 1987, the state repealed its ban on interracial marriage, which had been ruled unconstitutional by the Supreme Court - in 1967.  One hundred thirty years after its ratification, Mississippi symbolically ratified the Thirteenth Amendment, abolishing slavery.  In 1989, it repealed its poll tax and twenty years later, in 2009, it repealed other discriminatory civil rights laws, which had been enacted as part of the Civil Rights Act - of 1964.

Prominent Mississippians (here's a few lists to peruse, one and two - the state evidently knows how to produce football players and musicians/singers)

Posted by Brave Astronaut at 9:07 PM