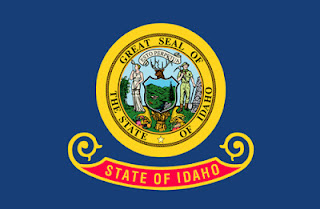 The first permanent settlement in what became Idaho was established by the Mormons at Franklin in 1860. That same year gold was discovered at Orofino Creek in 1860 and prospectors swarmed into the territory., but they left little more than a number of ghost towns. Mining and lumbering have been important for years. Idaho ranks high among the states in silver, antimony, lead, cobalt, garnet, phosphate rock, vanadium, zinc, and mercury. The state produces about one fourth of the nation's potato crop, as well as wheat, apples, corn, barley, sugar beets, and hops.


The current Governor of Idaho is Republican C.L. "Butch" Otter . Both Senators for Idaho are Republicans, Mike Crapo and James Risch. There are two Representatives for Idaho, also both Republicans.
Facts
Links
Prominent Idahoans - (here's a few lists to peruse, one and two)

Posted by Brave Astronaut at 8:48 PM