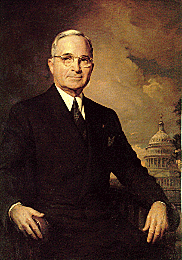 You will have to wait a few more week's for his entry, but today is the 62nd birthday of our 42nd President of the United States, Bill Clinton!

Our 33rd President of the United States, Harry S. Truman came into office as the Second World War was coming to a close, just over three months after being inaugurated as Vice President. It is widely reported that after hearing of the death of FDR, Truman went to Eleanor Roosevelt and asked if there was anything he could do for her, to which she replied, "Is there anything we can do for you? For you are the one in trouble now." True enough, for shortly after being sworn in as President, Truman was informed that the army was hard at work on a weapon that would bring the world into a completely new era - the atomic bomb. In likely the hardest decision ever made by a president, Truman ordered the dropping of two atomic bombs on Japan in August 1945, which led to the end of hostilities in World War II. in 1949, the Soviets detonated their first atomic bomb.

Truman also devoted himself to peace and was present at the signing of the United Nations Charter in San Francisco in June 1945. NATO was also established during Truman's presidency. Truman also signed the National Security Act of 1947, which merged the Departments of War and Navy into a new Department of Defense. The act also created the Air Force, the CIA and the National Security Council

Truman started his presidency by continuing the policies of his predecessor. As he grew into the job, FDR's New Deal became Truman's Fair Deal. He continued to excel in foreign affairs, starting the program that became known as the Truman Doctrine, established primarily to protect Greece and Turkey from Russian forces. The Marshall Plan, named for Truman's Secretary of State, George C. Marshall, helped to rebuild the countries of Europe after World War II. Truman again went up against the Russians, when they blockaded West Berlin. Truman responded with the Berlin Airlift. Truman also set a precedent when he made the decision to recognize the new state of Israel in 1948. 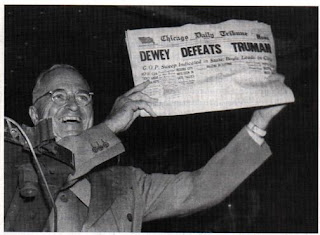 In 1948, Truman sought reelection. He was unpopular and his defeat was widely expected and reported. He had also signed an Executive Order to integrate the armed forces of the United States. The Republican candidate, Governor Thomas E. Dewey of New York did not campaign as well as Truman's Whistle Stop campaign and Truman was reelected albeit by a narrow margin. In fact, papers in Illinois were late to the results, sending a print run of papers that carried the banner headline, "Dewey Defeats Truman."

As Truman's tenure as President came to a close, he spent the remaining years overseeing the Korean Conflict, working hard to keep the fight localized so as to not provoke the Russians and the Chinese. His popularity suffered its greatest blow when he fired General Douglas MacArthur from his command in Korea. He retired from the presidency in 1953 and returned home to Missouri where he died on the day after Christmas in 1972, nearly twenty years after leaving the presidency.

The Facts
The Election of 1948
Trivia
Links

A couple of good quotes from Truman;
"I never give them hell. I just tell the truth and they think it's hell."
"I have found the best way to give advice to your children is to find out what they want and then advise them to do it."
Thanks for the info, again!

Truman is one of those presidents who really let fly with whatever he was thinking. God, I miss those days.