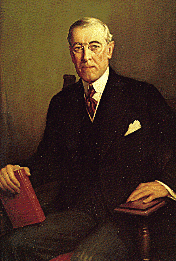 It is somewhat appropriate that Woodrow Wilson's entry should come the day after Bastille Day. He was of course, President of the United States and the representative at the negotiations over the Treaty of Versailles at the conclusion of World War I.

Our 28th President, Thomas Woodrow Wilson, came to the Presidency with the ideals of his predecessor, Theodore Roosevelt. He believed he was the personal representative of the people. His values and ideals led the nation into the First World War to "make the world safe for democracy." Wilson had seen war up close. He was the son of a Baptist minister and had spent the Civil War in Atlanta, Georgia and most of the Reconstruction Era in Columbia, South Carolina.

Wilson dedicated his life to academia and was not thinking about a political career. He became a president for the first time in 1902, when he became the 13th President of Princeton University. He also served on the faculties at Bryn Mawr (I'd get in trouble if I didn't mention that) and Wesleyan University. His growing reputation led democratic leaders to come calling, who persuaded Wilson to run for Governor of New Jersey, an office he was elected to in 1910. (It had nothing to do with the extra-marital affair that Wilson had, no not at all.) Two years later he received the nomination of the Democratic Party for President and won the election in a three-way vote, where the Republican votes were split between Theodore Roosevelt and William Howard Taft.

President Wilson spent the majority of his first term on domestic issues, lowering tariffs and improving the plight of the American worker. It was during the first Wilson Administration that the Federal Trade Commission and the Federal Reserve System were established. When he ran for reelection in 1916, he used the slogan, "he kept us out of war," as the conflict that would become the First World War had erupted in Europe shortly after he was first elected President. However, shortly after his reelection, he determined that the United States could no longer remain neutral, primarily due to Germany's decision to begin unrestricted submarine warfare. He asked Congress for a Declaration of War in April 1917.

American involvement led to an Allied victory and Wilson traveled to France to help negotiate the treaty. Encompassed in the Treaty of Versailles were Wilson's Fourteen Points and the League of Nations, the predecessor to the United Nations. Upon returning to the United States, Wilson set out on a cross-country tour to promote the Treaty and the League. While on the trip, Wilson suffered a stroke and never fully recovered. It is widely speculated that Wilson's second wife, Edith Wilson, was indirectly responsible for running the country while her husband recuperated. Wilson left the presidency and retired to a home in Georgetown, in Washington, DC, where he died just five years after leaving the presidency.

I had no idea Wilson was a Southerner! There is something eerie about the idea of him meeting Robert E Lee, and I find it intriguing that he may have been dyslexic. He is certainly proof that dyslexia is not a barrier to getting a good education. Though you'd never guess that from our current incumbent's attitude toward education...