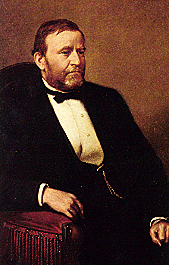 U.S. Grant is one of my favorite presidents, although he is consistently found in the lower fourth of presidential rankings. I think it comes partly from a class that I took in college where one of the required reading was his memoirs. The work is one of the best works I have ever read. Grant, in the final year of his life, turned to Mark Twain to help him provide a windfall for his family. Grant finished writing the book a month before his death from throat cancer.

Grant was not the first, nor the last, military man to gain the Presidency. He quarreled with President Johnson and became a hero to the Radical Republicans, who sought him out to run for President in 1868. He was a reluctant politician, accepting the nomination of the Republicans by replying, "Let us Have Peace," which became the slogan for Grant's campaign. His presidency featured the final days of Reconstruction and Grant also signed legislation that established, among other things, Yellowstone National Park (1872) and made Christmas a National Holiday (1870).

The economic Panic of 1873 cost the Republicans control of the House of Representatives for the first time since 1856 and the economic shockwaves took several years to recede, ultimately resulting in the Democrats winning the White House in 1876, but that's a story for next week. The Grant Administration was not without scandal, most notably the Whiskey Ring scandal and the Credit Mobilier, which brought down Grant's first vice president, Schuyler Colfax. While Grant was not directly involved with the scandals, it is his tolerance of corruption that pushes him toward the bottom of the list of presidents.

During his post-presidency, Grant traveled extensively around the world. He returned to the United States and was drafted to run for a third term as president in 1880. The nomination went to James Garfield and Grant campaigned for him, but that's a story for two weeks from now.

Fascinating! Filled with all kinds of tasty trivia nuggets . . .


And I'm not saying that just because Grant's from Ohio.

Wow -- I had no idea that Julia Grant was a friend of Susan B Anthony! I learn so much about the presidents reading your blog. I love these snippets and must keep coming back to read the ones I've missed so far. Now I'm going to check out Pat Nixon's meatloaf...

Amy - but remember he "rests" forever in New York.

Mary - glad to hear that you are enjoying the series. It has been a lot of fun writing them. I am moving into a period of my favorite presidents, so it will be even more fun for me.