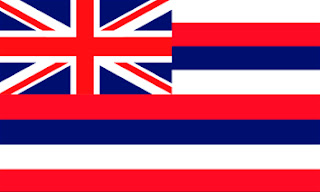 To begin on a personal note, today is the Brave Astronaut's birthday.  So if you've forgotten to send me some birthday wishes - there's still time.  For those who have - my thanks.

Our final state, Hawaii, was once an independent kingdom between 1810 and 1893.  At the request King Kamehameha I, the territorial flag was designed, with eight stripes of white, red and blue that represent the eight main islands. The flag of Great Britain is emblazoned in the upper left corner to honor Hawaii's friendship with the British. Hawaii is one of four states, besides the original thirteen, that were independent prior to becoming part of the United States, along with the Vermont Republic, the Republic of Texas, and the California Republic.  Its status as an independent kingdom led it to enjoy, along with Texas, formal diplomatic recognition internationally.

Hawaii was first settled by Polynesians sailing from other Pacific islands between 300 and 600 AD.  In the late 18th century, in 1778, Hawaii was visited by British captain James Cook, who called the area the Sandwich Islands.

The current Governor of Hawaii is Democrat Neil Abercrombie. In the new Congress in January, the state will have only its sixth and seventh Senators in its short state history.  Senator Daniel Akaka (D) is retiring at the end of this Congress, he will be replaced by Congresswoman Mazie Hirono (D).  On Monday, Senator Daniel Inouye died at the age of 88.  The Congressional delegation has two members, both Democrats.
Facts
Links
Prominent Hawaiians - (here's a few lists to peruse, one and two)

Paw - Thanks for the addition! Merry Christmas!