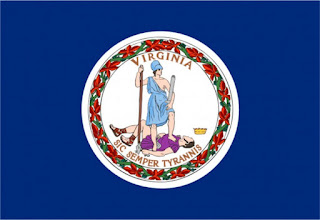 The second Commonwealth in our series (after Massachusetts), Virginia also has the longest continuous history of any of the American States, with the founding of Jamestown in 1607. During the Civil War, Richmond, the current state capital, served as the capital of the Confederacy. Of course, some still refer to Richmond as "the Occupied City." It was during the Civil War that the state of West Virginia (#35) was created, which we will visit in about four months. The Virginia General Assembly is the oldest legislature in the Western Hemisphere.

Virginia owns the Presidency. It has produced the most so far. The Mother of the Presidency lays claim to eight presidents (in order of appearance):
Partially due to its proximity to my home state of Maryland, I have been to Virginia a fair number of times. We have friends who live in Charlottesville (where we have spent several nice weekends - taking drives up along Skyline Drive). I have been to several professional meetings in Virginia and will return to Richmond for a meeting in the fall. I have done the Civil War tour through the state (Manassas, Richmond, Petersburg, and others). I have been to Hungry Mother State Park in southwestern Virginia.

Mrs. BA and I have several friends that live in Northern Virginia and we travel "across the river" to see them on occasion. Sometimes its hard, though because all the roads seem to be named Glebe. But we soldier on.

There is a fair amount of history to recount about the Commonwealth, but you can read that from any one of the number of links below. Here's what Brave Astronaut has been reporting in this series so far.

Virginia's Governor is a Republican (and mentioned on most shortlists for the vice presidency in the upcoming election), Bob McDonnell. Virginia's governors are elected for three year terms and may not run for reelection (but can be elected again - as long as it is not consecutive). It's Virginia. The two Senators of the Commonwealth of Virginia are Democrats, former governor Mark Warner, and Jim Webb, who will retire at the end of the current term. There are 11 House districts in Virginia and the delegation currently has 8 Republicans and 3 Democrats.
Facts
* - close readers of this blog may have noted that I have been inserting quotes in the names of the signers - for those who have been wondering - the quotes are from 1776, which opened last night at Ford's Theatre. Get your tickets now, the show runs through May 9.

Posted by Brave Astronaut at 8:44 PM

I really admire Virginia's history--this post is encouraging me to visit soon.