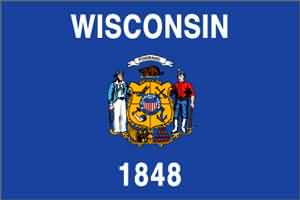 The state of Wisconsin is the country's leading producer of dairy products - one of its other nicknames is "America's Dairyland."  Recreationally, the state has over 14,000 lakes and water sports, ice-boating, and fishing are popular, as are skiing and hunting. The state has 95 state parks, forests, and recreation areas that take up one-seventh of the state's land.  The state's water covers 11,188 square miles, more than all but Alaska, Michigan, and Florida.

Wisconsin has been a pioneer in social legislation, providing pensions for the blind (1907), aid to dependent children (1913), and assistance to seniors (1925). In labor legislation, the state was the first to enact an unemployment compensation law (1932) and the first in which a workman's compensation law actually took effect. In 1984, Wisconsin became the first state to adopt the Uniform Marital Property Act.  The state has a long history of Progressivism led by the fiery Robert "Fightin' Bob" LaFollette, Sr.

The current Governor of Wisconsin is Republican Scott Walker.  Walker faced a recall election earlier this year after pushing through legislation limiting union influence, but survived. The Senators for Wisconsin are split by the ideological aisle, Ron Johnson (R) and Herb Kohl (D). The Wisconsin Congressional delegation is also relatively equally split, with eight members, three Democrats and five Republicans.
Facts
Links
Prominent Wisconsinites- (here's a few lists to peruse, one and two)
The State of Wisconsin is featured prominently in fiction and in American Culture.  The TV shows, Happy Days, Laverne and Shirley, and That 70s Show were all set in Wisconsin.  The soap operas, The Bold and the Beautiful and The Young and the Restless also star the Badger State.  Barbie, Paul Bunyan, Jack Dawson, Roz Doyle, and Donna Moss were all fictional characters with Wisconsin "backstories."

Posted by Brave Astronaut at 9:38 PM