First of all, a Happy and Blessed Thanksgiving to all those out there in the United States.  The Brave Astronaut clan is likely sitting down to our Thanksgiving feast at the beach.  I hope wherever you are, you are enjoying good food, friends and family.  Now on to today's State of the Union - we are down to the final five! 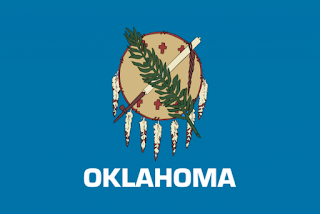 We have arrived at the final five states of the Union (to date) and the first of the states to be admitted in the 20th Century.  When the area was still a territory, on April 22, 1889, the first day homesteading was permitted, 50,000 people swarmed into the area. Those who tried to beat the noon starting gun were called “Sooners,” hence the state's nickname.


In April 1995, the state capital, Oklahoma City, was the site of the worst act of domestic terrorism in American history, when the Alfred P. Murrah Federal Building was bombed by Timothy McVeigh and Terry Nichols, killing 168 people, including 19 children. McVeigh was sentenced to death and executed in June 2001 and Nichols was sent to prison for life without the possibility of parole.

The current Governor of Oklahoma is Republican Mary Fallin. Both Senators for the Sooner State are Republicans, Jim Inhofe and Tom Coburn. The Oklahoma Congressional delegation has five members, which is also now completely Republican after the retirement of the 2nd District's Dan Boren.

Facts
Links
Prominent Oklahomans - (here's a few lists to peruse, one and two - a lot of astronauts from Oklahoma!)

Posted by Brave Astronaut at 4:52 PM

Email ThisBlogThis!Share to TwitterShare to FacebookShare to Pinterest
Labels: Holiday, States of the Union, Vacation