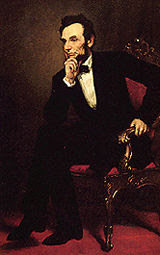 [I've been approved by Britannica as a "worthy blogger!" - So you can all enjoy Britannica content from here out. Here's the Lincoln entry and it also appears below in the links section.]

Our sixteenth President is the second of the real "heavy hitter" presidents. This is fairly evident by the fact that Abraham Lincoln's mug is carved into Mount Rushmore. This entry could go on and on with the accomplishments of Lincoln, but lets try and find some lesser known things about Old Honest Abe.

It should be noted that Lincoln did not hold any elective office when he was elected President. He had served one term as a member of the House of Representatives. He had tried to become Senator from Illinois in 1858, but lost to Stephen A. Douglas, following the famed Lincoln-Douglas debates. Lincoln is also regarded as one of the primary figures in the new Republican Party and as president, is credited with strengthening it into a force. But Lincoln also rallied Democrats to his cause, taking advantage of the "Rally Around the Flag" mentality exhibited by Americans in time of war or national crisis.

Lincoln fathered four children, all boys, with Mary Todd Lincoln. Two of his sons predeceased him, Edward (1846-1850) and his beloved Willie (1850-1862). His third son, Tad, was born in 1853 and died in 1871. Only his oldest son, Robert, survived to adulthood. Robert Todd Lincoln holds an interesting trivia record in history: While he had been invited to accompany his parents to Ford's Theater, he was therefore not present at his father's, he was present at the assassinations of both President James Garfield and President William McKinley. Robert Todd was also present at the dedication of the Lincoln Memorial in 1922, four years before his death.

Posted by Brave Astronaut at 10:23 PM

There is a replica of the Log Cabin at the Robert Bennet Forbes House in Milton Massachusetts. I know this because some relative of mine was commissioned to build it.

The story is much better in person.

As it turns out, I've worked for two repositories that each hold one of the five existing copies of the speech that were written out in Lincoln's hand. I didn't ever get to see the LoC copy, but the university where I worked had their copy encased in plexiglass (all archivally sound materials were used, trust me), and we used to bring it out regularly to show students, researchers, etc. It was always a thrill to watch them read it.

It was always fun to "spring" it on people and watch their reactions. As it turned out, Mrs. BA (before she was Mrs. BA) came to visit me one weekend, and it just happened to be a reunion weekend. I had to work in the morning, and we arranged for her to meet me in the archives at the end of my shift. Since we had the GA out, I just handed it to her.

This version was written on folded, lined notebook paper. So when you saw it for the first time, you would see the last few lines of the text and Lincoln's signature on the left-hand page, the fold (opened), and then the date and beginning of the text on the right-hand page. Got that?

I'm happy to say that Mrs. BA didn't drop the document, but the shock was quite evident. It was definitely the most dramatic reaction I got while I was there. The most touching was the student from China explaining quietly to his mother what it was she was viewing and why it was important.

The Lincoln Museum in Ft Wayne is to close in June....FOREVER!
The collection is to be broken up, and who knows where it all will end up.
Harold Holzer is just one of many Lincoln experts who is against this. For one thing, its very conveniant for researchers to have all the info that the museum has, in one place.
And, for another, like many cities, Ft Wayne is trying to get people to come to its downtown area, where the Lincoln Museum is. They are building a new baseball stadium (despite NOT haveing a major league team, nor does it look as if we ever will have one), there are hotels and restaurants downtown, a huge park, miles of walking/biking trails in and around the downtown area. Now, they are taking away one of the attractions that would keep the future ball fans in the area, perhaps another day. This is so stupid, I can't beleive the city isn't fighting to keep this museum here in Fort Wayne!

NJM - it is surely amazing what people will do with their money.

C in DC - I still love that story

Anon - I would suggest that you contact your local elected representatives and perhaps the historical societies and archival organizations. If you need help, contact me offline and I can direct you to those that should be able to help.

Abraham Lincoln, by some accounts is the illegitimate son of Abraham Enloe and Nancy Hanks. Lincoln said, "My right name is Enloe, but I go by the name of my stepfather." Lincoln's half-brother, Wesley Matthew Enloe looks alot like him!