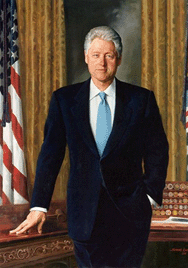 [I was admonished for not including a link to Chevy Chase lampooning President Ford. So let's get this out of the way right up front. Here is the late Phil Hartman in one of my favorite Bill Clinton sketches. Enjoy.]

For a long time I had kept the newspapers proclaiming Bill Clinton's win in 1992. I was teaching at the time and I had been talking with my students over the course of the term about how this nobody from Arkansas was not going to win anything. But of course, William Jefferson Clinton became the first Democrat since Franklin Roosevelt to win a second term.

Clinton met President John F. Kennedy in the White House Rose Garden as a delegate to Boys Nation in 1963, which pushed him in the direction of public service. That same year, Martin Luther King's speech at the Lincoln Memorial had a profound effect on him. He settled in Arkansas, lost an election for Congress, was elected Attorney General of the state, and ultimately served five terms as Governor of Arkansas. When he was elected in 1978, he was the youngest Governor in the country.

As President, Clinton brought the federal budget under control, balancing it and creating a budget surplus. Despite an early failure in the area of health care reform, the country enjoyed a great period of economic prosperity and peace under the Clinton administration. Clinton also instituted the controversial "Don't Ask Don't Tell" policy on homosexuals in the military as well as pushing for and signing into law the North American Free Trade Agreement (NAFTA).

Clinton's controversial policies led to the Democrats losing control of Congress in the off-year elections in 1994, the first time the Democrats had not controlled Congress in more than forty years. After being reelected in 1996, the Monica Lewinsky scandal broke wide open and Clinton became the second president in history to be impeached. He was acquitted on all charges in a widely televised trial.

In the area of foreign policy, Clinton undertook three major military offensives. The first was a limited military engagement against Iraqi forces, while also returning sanctions against Iraq and Saddam Hussein. Second, Clinton ordered forces into Somalia, which resulted in the downing of American helicopters and the deaths of many Somali civilians and American soldiers. Finally, Clinton oversaw the involvement of American troops under the NATO flag to stop ethnic cleansing in the Balkans, specifically Kosovo.

Posted by Brave Astronaut at 8:03 PM

From what I understand, my cousin, Michael Isikoff, had this story yanked out from under him. I'm still not sure how I feel about any of that.

Also, as a native Arkansian, I would've thought that Charles liked Clinton. He doesn't, though. Clinton completely disgusts him.
And I'm still not sure how I feel about any of that...

Lana - Wow! Famous and related to you - I never knew!

As to the latter, I hope that you realize that change is coming