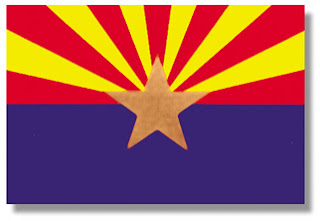 The 13 rays of red and gold on the top portion of the Arizona state represent both the 13 original colonies and the rays of the Western setting sun.  The bottom half of the flag is in the same liberty blue color as the United States flag.  Arizona was once the largest producer of copper in the nation so a copper star was placed in the flag's center.  Arizona was the last of the contiguous states to be admitted to the Union.

A Spanish Franciscan friar, Marcos de Niza, was the first European to explore Arizona. He entered the area in 1539 in search of the mythical Seven Cities of Gold. Following the end of the Mexican War, most of the Arizona territory became part of the U.S., and the southern portion of the territory was added by the Gadsden Purchase in 1853.

Arizona history is rich with legends of the Old West. The great Indian chiefs Geronimo and Cochise led their people against the frontiersmen in Arizona.  Tombstone featured the West's most famous shoot-out, the Gunfight at the O.K. Corral.  Arizona has one of the largest U.S. Indian populations; more than 14 tribes are represented on 20 reservations.

The current Governor of Arizona is Jan Brewer, a Republican. Both Senators for Arizona are also Republicans - 2008 Presidential Candidate John McCain and John Kyl, although Kyl is leaving the Senate at the end of this year - the new Senator will be Congressman Jeff Flake (R). As a result of the 2010 decennial census, the Arizona Congressional delegation grew from eight to nine.
Facts
Links
Prominent Arizonans - (here's a few lists to peruse, one and two)