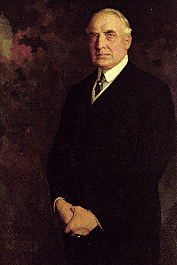 Our 29th President, Warren Gamaliel Harding is one of those that is consistently found at the bottom of the presidential pile, despite his enormous popularity while in office. However, there are several things about Harding that will keep people talking about him for some time. First, there is the whole mysterious death thing, there is speculation that his wife may have poisoned him because he was having an affair. Then there is the possibility that the United States may have already elected our first black president. In the April 6, 2008 issue of the New York Times Magazine, there is an article about Harding's lineage. The historian William Estabrook Chancellor assembled a family tree for Harding that shows Harding to be the great-grandson of a black woman.

Harding's election may be well due to the efforts of his wife Florence. Florence stood behind her husband propelling him higher and higher. A divorcee, she pursued Harding until he reluctantly proposed marriage. Florence's father forbid his wife to attend the wedding and did not speak to Harding or Florence for several months.

Harding's time in office was marked by some successes, but also scandal. Harding signed several of the peace treaties that formally ended World War I, but kept the United States out of the League of Nations. He oversaw the Washington Naval Conference, the first disarmament conference ever held. The Teapot Dome Scandal is what many will remember about the Harding Presidency, however. The scandal was named for an oil field in Wyoming that was under public control and funding was diverted into the wrong pockets (wait, that's illegal?).

Harding's death in San Francisco came after he contracted pneumonia on the train ride down from Alaska through Canada. Here's a picture from the National Archives showing him receiving a salmon. He gave a speech in Washington and then arrived in San Francisco. When he died, doctors believed it was a heart attack or stroke that killed him. Florence Harding refused to let an autopsy be performed, leading to the speculation that Harding had been the victim of a plot. Harding was known as somewhat of a ladies man, reputed to have had several affairs with women in Ohio. Given Florence's reputation, the speculation may not be that far off.

The Facts
The Election of 1920
Harding was another "dark horse" candidate who was not well known outside of his home state. The election of 1920 also marked the first election where the power of "Hollywood" became a factor. Stars like Al Jolson, Mary Pickford, and Douglas Fairbanks all traveled to campaign with Harding. The election of 1920 was also the first one where women were allowed to vote nationally.
Trivia
Links

Posted by Brave Astronaut at 11:46 PM

I mentioned in an earlier message that my grandmother said we were some sort of cousin to Warren Harding. She always said he was part black, so if Grandma said it, it must be true.

Grandma was born in 1907 and her family came out here from Indiana and Ohio shortly after. She would have been a young girl when Harding was president and I don't know if she ever met him.

Sadly, all the elders in our family are gone and so is the basis for the story.

DD - Well there you go. Strong evidence confirming we have already had our first "black" president. Grandma said so.

During Harding's presidency, he nominated Charles Sherrod Hatfield, a judge under United States Court of Customs and Patent Appeals. Little did Harding know that Hatfield's grandson would one day to become a hero. The grandson is Charles Hatfield Schulze, a man who died of a massive heart attack while saving two young boys in Florida. God rest his soul and we wish him well.