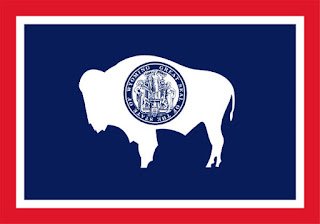 As with so much of the midwest, the US acquired the land comprising Wyoming from France as part of the Louisiana Purchase in 1803. John Colter, a fur-trapper and part of the Lewis and Clark expedition, is the first white man known to have entered the region. In 1807 he explored the Yellowstone area and brought back news of its geysers and hot springs. Robert Stuart pioneered the Oregon Trail across Wyoming in 1812–1813 and, in 1834, Fort Laramie, the first permanent trading post in Wyoming, was built. Western Wyoming was obtained by the U.S. in the 1846 Oregon Treaty with Great Britain and as a result of the treaty ending the Mexican War in 1848.

When the Wyoming Territory was organized in 1869, Wyoming women became the first in the nation to obtain the right to vote. In 1925, Nellie Tayloe Ross became the first woman governor in the United States.

The current Governor of  Wyoming is Republican Matt Mead. Both Senators for Wyoming are Republicans, John Barasso and Mike Enzi. Wyoming (like other sparsely populated states) has only one At-Large member, Cynthia Lummis (R).

Facts
Links
Prominent Wyomingites - (here's a few lists to peruse, one and two)

Posted by Brave Astronaut at 9:49 PM