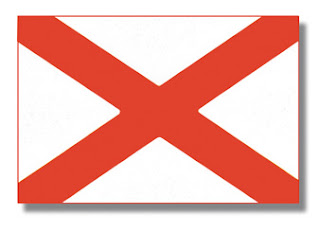 In high school, I dated a girl from Alabama.  Flew from New York to her senior prom.  In a full leg cast.  Through three airports.  Danced at the prom and enjoyed post-prom activities.  That was a long time ago.  Kimberly Ann Port - where are you now?

The twenty-second state admitted to the Union is also the first state alphabetically - Alabama.  As it is adjacent to the state of Florida, the territory was visited by Hernando DeSoto on his quest for the fountain of youth.  During the Civil War the Confederacy was established in Montgomery and served as the initial capital of the Confederacy.  The state was later a flashpoint in the Civil Rights movement, including the Montgomery bus boycott and the Freedom March from Selma.

The current Governor of Alabama is Republican Robert Bentley. The Senators for Alabama are both Republicans, the senior Senator is Richard Shelby and the Junior Senator is Jeff Sessions. There are seven members in the Alabama Congressional delegation, all but one are Republicans.
Facts
Links
Prominent Alabamans - the state seems to have produced a fair number of athletes (here's a few lists to peruse, one and two)

Posted by Brave Astronaut at 9:19 PM