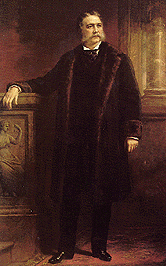 Our twenty-first president, Chester Alan Arthur, looked "presidential," with his impressive sideburns and facial hair. Unfortunately, he was also part of the powerful New York political machine and as a result, his presidency was not as successful as he had been in New York State.

Appointed to be Collector of the Port of New York by President Grant, Arthur became entwined with the machine, led by the New York Senator, Roscoe Conkling. While an honest man, he was caught up in an overhaul of the New York system undertaken by President Hayes and Arthur was ousted as Collector. Conkling tried to get President Grant the nomination of the Republicans in 1880, instead settling for the VP slot for Arthur.

Once Arthur succeeded to the presidency, he led the fight for civil service reform, distancing himself from Conkling and machine politics. Under pressure from the White House and their constituents, the Congress passed the Pendelton Act in 1883, which essential destroyed the "spoils system" in government service. The Arthur administration also enacted the country's first immigration law. At Arthur's request, the International Meridian Conference was held in Washington, DC in 1884, which established the Prime Meridian.

Arthur kept hidden the fact that he had been diagnosed with Bright's disease (which also afflicted future first ladies Florence Harding and Edith Wilson) and while he campaigned for the nomination in 1884, the Republicans chose longtime presidential aspirant, James G. Blaine, instead (I note here that Blaine had served as Secretary of State to several presidents, including Arthur). Arthur has the distinction of being the last president to submit his name for nomination and not receive it. Arthur died only two years later from a cerebral hemorrhage and was later recalled as a man who had "entered the Presidency so profoundly and widely distrusted," and yet "no one ever retired . . . more generally respected."

We seem to need another Pendleton Act. <:(

It's pretty impressive that he started out with a poor reputation and left the White House with a fine one. For that alone, he ought to be remembered.

Lana - Gee, ya think? One can only hope that change is really coming down the road.

Mary - one of those rare occasions when the reputation got better after leaving.