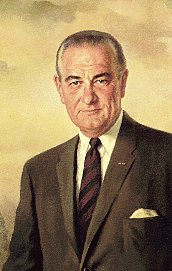 Lyndon Baines Johnson came to the presidency as a result of the tragic assassination of John F. Kennedy. It was however a job that he had sought in 1960. As a result, Kennedy found it necessary to create a political compromise and pick Johnson as his running mate.

Johnson envisioned an America that lived in a Great Society. Johnson had been born into a family that struggled and it instilled in him a keen understanding of poverty in America. in 1937, Johnson entered public service when he was elected to the House of Representatives. Eleven years later he moved to the upper house, when he was elected to the United States Senate. In 1953, he became the youngest Minority Leader in history. A year later, he became Majority Leader when the Democrats took control of Congress.

When Johnson rose to the presidency in 1963, he spent the next year pushing through many of the efforts that had been started by President Kennedy. When he ran for a term of his own in 1964, he was elected by the largest margin of popular votes ever recorded, more than 15 million. After the election, Johnson advanced his ideas for the "Great Society." Johnson's domestic agenda was widely praised and many of the reforms helped Americans across the board. However, Johnson was vilified for his policies on Vietnam and as a result, he chose to not seek reelection in 1968. He returned to his ranch in Texas, where he died suddenly from a heart attack in January 1973.

The Facts
The Election of 1964
Trivia
Links

Posted by Brave Astronaut at 8:53 PM

I read Robert Caro's biographies of LBJ, and especially in Master of the Senate, I could not help but appreciate some of his abilities, even though I still can't get over some home-grown biases against him. Read it, it will make you weep for the bland leadership, in both parties, currently occupying Capitol Hill.
It's 1200 pages long, so plan this for the dead of winter...
Philly Girl

I share some of Philly Girl's biases, but one thing is for certain, like Barry Goldwater: LBJ wasn't afraid of speaking his mind. (Did you know, by the way, that Hilary Clinton actually campaigned for Barry Goldwater, ages ago? Or so I've heard...)

Philly Girl - Caro is the man when it comes to LBJ. But Doris has better stories.

Mary - You are correct about Hillary working for Goldwater - we all make mistakes.