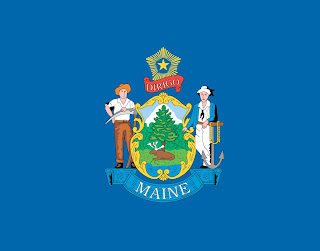 Maine started out as part of Massachusetts before becoming part of the United States in the Missouri Compromise of 1820 (we'll cover that more next week).  Maine holds the distinction of being the easternmost of all of the US states and Eastport and Lubec are the easternmost city and town in the United States, respectively.  It is the least densely populated state east of the Mississippi River.  During the Civil War, the 20th Maine, under Joshua Chamberlain rose to distinction during the Battle of Gettysburg.

Maine evidently holds 98% of the country's "low bush" blueberries and produces 25% of the country's blueberries.  There are also the Maine potato, Maine maple syrup (shh, don't tell Vermont), um, Maine lobsters.  While there's nothing wrong with blueberries, I personally will associate raspberries with Maine as my siblings, cousins, and I would walk the road from my grandmother's house and pick raspberries from the bushes along the side of the road.  Naval shipbuilding continues in Maine at the Portsmouth Naval Shipyard and the Bath Iron Works.

On the list below of prominent "Down Easters," I should put my father (and grandfather on this list) but then again they were both born in France.  I could put down my brother who now lives there, but also not born there. There is my aunt's second husband, who was part of a prominent fish monger family in Camden.  By the way, on all the lists I looked at - I didn't see Andre the Seal or the Belted Galloway but I guess the cows aren't native, either). Growing up in Maine - we would always take at least a day to drive up to Camden to see Andre and then the Belted Galloway cattle, before taking a ride up to the top of Mount Battie.

The current Governor of Maine is Republican Paul LePage. The Senators for Maine are both Republican women - Olympia Snowe (who is leaving the Senate this year) and Susan Collins.  Both Snowe and Collins represent a dying breed in the Republican party - the moderate.  Maine has only two Congressional Representatives, both Democrats.
Facts
Links
Prominent Mainers - quite the literary set from the Great State of Maine (here's a few lists to peruse, one and two)