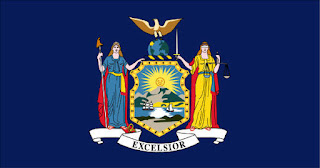 Starting on a personal note, it is somewhat appropriate that we arrive at New York on this date. Today would have been my mother's 82nd birthday. She's been gone for six years now and I miss her each and every day. Although she was born in New Jersey, raised in Rhode Island, she spent her adult life in New York, raising me and my siblings. It is truly the state where she made her mark. Rest well Mom.

I am a New Yorker. I was born there, spent all of my childhood there and moved from the Empire State when I was 35. It is the state with which I most identify. Having lived in three different areas of the state (Long Island, the Capital District, and the Hudson Valley), people used to tell me I didn't have a New York accent, the New York accent one hears from those who live in Gotham and its environs.

I have traveled extensively throughout the state - crossing into Canada at both the Northern border (shout out to Plattsburgh!) and the Western border (hey Buffalo!). I have been through Fulton (city with a future) on my way to Oswego. I've been through the center of the State, visiting Cooperstown.

I debated about what other information to provide here (the histories are all covered well below) and no one needs an extensive travelogue of my time in the Empire State. So by all means, let's do trivia!
New York has done very well in the presidential arena as well, producing six chief executives:
In addition there have been five men who have been "a heartbeat away from the presidency," including Gerald Ford's Vice President and two-time presidential candidate himself, Nelson A. Rockefeller. The others are: Aaron Burr, George Clinton, Schuyler Colfax, and William Wheeler.

The Governor of the Empire State is a Democrat and the son of a former Governor. Andrew Cuomo was elected in 2010, while his father, Mario, served as Governor of the state from 1983 to 1994. Both of the Senators for the state are Democrats, Chuck Schumer and Kirsten Gillibrand. The House delegation is currently 21-8, in favor of Democrats.
Facts
Links
Prominent New Yorkers (or Nuh Yawkers) (do I get to be on this list? Here's some other more lengthy ones from which I cribbed the list below - here and here, I included below those who screamed NEW YORK to me)

Posted by Brave Astronaut at 8:46 PM

Email ThisBlogThis!Share to TwitterShare to FacebookShare to Pinterest
Labels: New York, States of the Union, Video

How about Lucille Ball, Elizabeth Cady Stanton, and Susan B Anthony?

She is going to get you to include women yet!

The dude actually told me who won that first chess tournament. I think he's ready for Jeopardy!

C - look at you with the Western NYers. Perhaps my "downstate" bias was too evident?

Anna - I've been trying with the women. And we all know the Dude is smart.