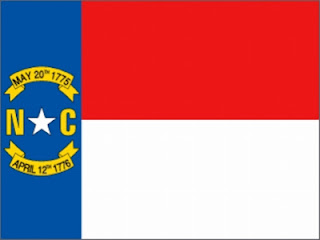 For the moment (for about another month), the state of North Carolina is home to one of my sisters. She moved to Wilmington several years ago, but is about to relocate to the Garden State. As a result of her presence and some really good beaches, I have been to North Carolina several times. If one needed another good reason to visit the Tarheel State, the company that produces this delicious treat was founded and is headquartered in North Carolina.

What eventually became North Carolina was also the home of the first English settlement in the New World - Roanoke. Founded in 1585, more than twenty years before Jamestown and thirty five years before the Pilgrims put their buckled shoes on Plymouth Rock. Of course, the colonists at Roanoke disappeared without a trace and their fate is still undetermined, among them Virginia Dare, the first English child born in the Americas.

The Outer Banks are a very popular destination for Americans for those who like golf, lighthouses, and great beaches. Kitty Hawk is also located in the Outer Banks and it was the beach conditions that drew two bicycle shop owners from Ohio there to try and get their newfangled contraption into the air.

The state of North Carolina has produced two Presidents, the first was elected (as Vice President) from the state of Tennessee, Andrew Johnson. The other Andrew President (Jackson) was born near the border of North and South Carolina.The second was James K. Polk. North Carolina also brought us our fourth First Lady, Dolley Madison.

Until her term ends later this year (she has decided not to run for reelection), the current Governor of North Carolina is Bev Purdue, a Democrat. In this state that has been turning "purple" of late (President Obama carried the state in 2008 and is hoping to do so again this year), North Carolina's Senators are divided by the ideological aisle. Richard Burr is a Republican, Kay Hagan is a Democrat. The House delegation is currently split 7-6, in favor of the Democrats.
Facts
Links
Prominent North Carolinians (here's a few lists to peruse, one, two, and three - it appears the state produced it's fair share of journalists and boxers)

Posted by Brave Astronaut at 8:48 PM