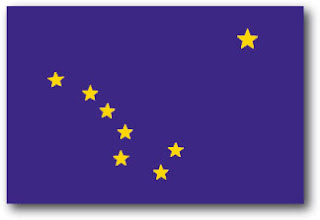 Alaska was purchased from Russia in March 1867, for the bargain price of $7.2 million equaling approximately two cents per acre, the sale negotiated by Secretary of State William Seward (and called Seward's Folly).  The first official census (1880) conducted after the purchase of Alaska reported a total of 33,426 Alaskans, all but 430 being of aboriginal stock. The Gold Rush of 1898 resulted in a mass influx of more than 30,000 people.

Our 49th State is also the largest of all of the states (twice the size of Texas, the #2 state in size) and one of the most least populated (ranking 47th in people).  Most of the state's residents live in the Anchorage metropolitan area.  The state has the longest coastline of all of the other states combined (it is surrounded by water on three sides).

The current Governor of Alaska is Steve Parnell (R). The Alaska Senators are split by the ideological aisle, Mark Begich is a Democrat and Lisa Murkowski is a Republican.  Begich won his seat from longtime Alaska Senator Ted Stevens, who later died in a plane crash in the state. Murkowski's father, Frank, was Governor of the state and also served as Senator.  Alaska has only one at-Large Congress Member, Don Young (R).

Facts
Links
Prominent Alaskans - (here's a few lists to peruse, one and two - as one might expect, very few people are from Alaska)