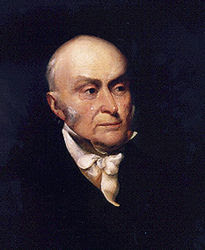 As mentioned last week, John Quincy Adams served his predecessor, James Monroe as Secretary of State. He also makes the trivia lists as a son who followed his father to the presidency (Would that he were the only one to hold that record . . . ). He also holds the distinction of being the only president to be elected to the House of Representatives after serving as President. In fact, J.Q. Adams was felled by a stroke in Statuary Hall in the Capitol, carried to an anteroom, where he died two days later. J. Q. While serving in Congress, Adams argued for the Amistad slaves before the United States Supreme Court in 1841.

Adams also served in the Upper House of Congress, elected to the Senate in 1802. The majority of his other public service came as Minister or Ambassador (the Netherlands, Portugal, Prussia, Russia, the Court of St. James).

J. Q. Adams' election was made possible by the House of Representatives as none of the four candidates in 1824 received a majority of the electoral votes. Henry Clay, a candidate himself, like Adams and his policies and threw his support to him, ensuring his election. Adams "rewarded" Clay with the plum position of Secretary of State (see where this is going? - but alas, Clay would be denied yet again). The man that lost to Adams was Andrew Jackson, not someone that you wanted on your bad side. He vowed to beat Adams in 1828, which he did.

The Facts:
Trivia:
Links:
Famous Last Words:
Here are the earlier ones:

Posted by Brave Astronaut at 10:15 PM

J.Q. died in the capitol building? Remember, I got to see the catafalque in storage in the basement? Handy! I wonder if they used the same one then. I'll have to review the history and let you know.

I'm always extremely dubious of famous last words. The chances are real last words are more likely to be "What the f...", "Oh Shi..." or "I wonder what happens if I press this..."

DD points out the catafalque. This will covered in more detail when we get to week 16, but here's a sneak preview, courtesy of the Architect of the Capitol.

Kim - don't forget the other popular, "Hey, honey, watch this!"

You didn't mention that the act of Clay throwing his support to Adams in the 1824 election in exchange for the Sec. of State position led to claims that a "corrupt bargain" had been struck. While much has been made of this over the past two centuries, I tend to think of the incident as "politics as usual" and the corruption claim to be mere sour grapes by Jackson. But then, I'm biased - love Adams and hate Jackson.

Well sure I didn't come right out and say it, but the last paragraph?