Stuck on Frank - Remember When You Could Lick Him?

I first saw this news this past December 12, which would have been Frank Sinatra's 82nd birthday.

From the United States Postal Service:

Ol' Blue Eyes will get his own postage stamp next spring.

The stamp commemorating Frank Sinatra was announced Wednesday by Postmaster General John Potter, who called the crooner "an extraordinary entertainer whose life and work left an indelible impression on American culture. His recordings, concert performances and film work place him among America's top artists, and his legendary gift for transforming popular song into art is a rare feat that few have been able to replicate," Potter said.

My mother is surely happy wherever she is. I am convinced she has all her favorites over for dinner all the time, because in heaven, you get to do whatever you want and everybody is equal. She had a thing for Ol' Blue Eyes. Today would have been her 78th birthday. Here is a picture of her with her seventh grandchild (my first son). I wish she were around to meet her eighth. 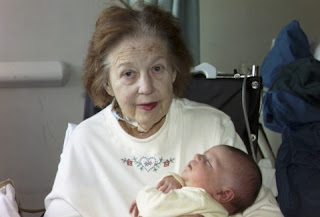 Today I will engage in a long standing Brave Astronaut tradition. I will dye Easter eggs with my son. I remember sitting at the kitchen table on Holy Saturday, while my mother prepared the dye out of hot water, vinegar, and food coloring (in the days before Paas tablets). The table would be covered with newspaper and my sister and I would spend time coloring eggs so the "Easter bunny" could hide the eggs overnight for me to find the next morning. My son will hopefully enjoy it as much as I did (and there's also an Easter egg hunt to attend today as well).

Speaking of my mother, I spotted this article (link may not work) in the Washington Post about two weeks ago regarding efforts by the Library of Congress to help more than 700,000 registered blind and disabled users. One of those random things that my mother did in her early adulthood was she used to "translate" books into Braille. In fact, at some point, we had a Braille typewriter, but it vanished into the wind. But my mother is (was, should be) in the Library of Congress catalog for the books that she translated. (It also helped that her maid of honor went on to a long career at the Library).

The article describes how the Library (if you live here in DC or are in the profession, "the Library" always means the Library of Congress) is working with the National Library Service for the Blind and Physically Handicapped to render digitally the more than 60,000 audio works held in the Library of Congress by placing them on flash drives and giving disabled users the equipment to play the books. This represents a significant jump for the Library, which began offering books on long play records in 1934 and began switching to cassettes in the 1960s.
Posted by Brave Astronaut at 9:07 AM

That's very cool about your mom translating into Braille. I like that.

Out of a need to note near coincidence, I'll tell you that my father's birthday is today, the day after your mother's, the first time his birthday has been Easter, and he's 71.

DD - My mother was pretty cool.

Geof - Seeing as Easter will not be this early again until 2160, one presumes that none of us will be in a position to note that ever again.
How are you feeling?

Yes, a bit of a wait for the next opportunity to celebrate my father's birthday on Easter. Not even my grandkids will be able to celebrate it.

I'm doing pretty well. Getting better every day, and my suture is healing up quite well. Besides that one long cut, there's almost no evidence of the surgery on my body.