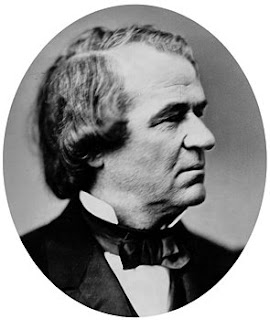 Our seventeenth President, Andrew Johnson (the photo at right is by Matthew Brady), is another of those that ranks near the lowest of all the presidents, although occasionally his ranking rises. He was noticed by Abraham Lincoln, when the Tennessean stayed in Congress while his home state seceded. Lincoln appointed him military governor of Tennessee and then he was selected to be his Vice Presidential running mate in the 1864 election.

What Johnson is mostly remembered for is being the first president to be impeached (he was of course the only president to hold that dishonor, but that's a story for a twentieth century president). There are numerous sites to commemorate this dubious event (two of which are linked below), but basically, Johnson ran afoul of the Radical Republicans in Congress and found himself on trial for his political life. What I will always remember about the Johnson impeachment will be the name Edmund G. Ross. In high school (or it might have even been junior high) we were shown a black and white film that dealt with the Senator from Kansas. Ross was one of the chapters in the book by John F. Kennedy, Profiles in Courage. It was by Ross' single vote to acquit that Johnson kept his job as President. Ross however, lost his job two years later.

While the Johnson presidency is considered by many a failure, he did have foreign policy success with the purchase of Alaska from the Russians. "Seward's Folly," so named for the Secretary of State that negotiated the deal, brought Alaska under U.S. control and of course, later discoveries of gold and oil in the territory proved beneficial.

Posted by Brave Astronaut at 10:24 PM

"...although occasionally his ranking rises."