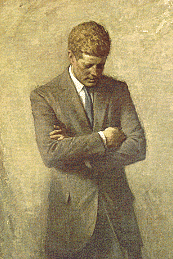 I'll get this right out there at the outset. John Fitzgerald Kennedy is my favorite president. Sure his presidency was short, he had many problems, and was a bit of a womanizer. But as I have long said, what men do with their personal lives is their business as long as it does not affect the office. I am sure that his assassination and the snuffing out of his youthful "vigah" certainly led to the lionization of the man who was the 35th President of the United States.

After graduating from Harvard University in 1940, Kennedy entered the Navy and commanded a PT boat in the Pacific during World War II. In 1943, PT 109 was struck by a Japanese destroyer, Kennedy is credited with saving the majority of his crew, despite suffering severe injuries in the accident, giving him back problems that would afflict him for the remainder of his life.

When he returned to Massachusetts after the war, he was elected to Congress and moved to the Senate in 1953. In 1956, his name was placed in nomination for the vice presidency at the Democratic convention. Kennedy and his allies soon realized that the nomination was not within their grasp and Kennedy withdrew. In retrospect, a good move, as the ticket of Stevenson and Kefauver was buried in the Eisenhower landslide in 1956.

Kennedy declared his intention to run for President in January 0f 1960 and went to the convention with enough votes to secure the nomination. In order to ensure party unity and secure votes where Kennedy might not otherwise find them, Kennedy tapped Lyndon Johnson to be the vice presidential nominee, in one of the biggest political compromises of the 20th Century. With his election by the narrowest margins (allegations of voting fraud were rampant), Kennedy became the first Roman Catholic President.

Kennedy's brief administration was marked by a series of foreign policy issues. In April 1961, shortly after taking office, Kennedy authorized the invasion of Cuba to try and topple the Castro regime. The troops were not given air support and the majority of the invaders were captured by Cuban military forces. The name of the failed invasion became known as the "Bay of Pigs." In the fall of 1962, Kennedy faced another challenge with Cuba with the Cuban Missile Crisis. Soviet forces had installed missiles in the island nation, with the ability of reaching U.S. shores in minutes. Kennedy ordered a naval blockade of the island and tensions rose very quickly. The Soviet Union blinked first and dismantled the missiles and war was averted.

In 1961, Kennedy faced his second major foreign policy crisis when the Soviets decided to further divide the city of Berlin, by erecting a wall between East Berlin and the rest of the city. The Berlin Wall divided the city until the fall of communism and was finally broken down in 1989. In June 1963, Kennedy traveled to Germany and gave his famous, "Ich bin ein Berliner" speech. In 1987, two years before the wall came down, President Reagan exhorted the Soviet leader Mikhail Gorbachev to "tear down this wall."

President Kennedy was the second president to become involved in the quagmire of Vietnam. Kennedy authorized sending additional "advisors" to the Southeast Asian country. Kennedy's successor, Lyndon Johnson, would escalate the U.S. involvement and Vietnam, which would wind up costing him the presidency (come back next week!). Kennedy also accelerated the U.S. space program declaring in a speech the objective of the U.S. that "before this decade is out, of landing a man on the Moon and returning him back safely to the earth."

Building on his call to service in his inaugural address, Kennedy established the Peace Corps in 1961. Kennedy also advanced the Civil Rights movement, by meeting with Black leaders, including Dr. Martin Luther King, Jr. Kennedy proposed sweeping legislation in the wake of several incidents in the South. It was after Kennedy's death that the Civil Rights Act was passed and signed into law by President Johnson in 1964.

In November 1963, as Kennedy looked forward to a reelection campaign in 1964, he traveled to Texas. On November 22, as he rode in an open top limousine, Kennedy was assassinated by Lee Harvey Oswald. The President was 46 years old.

The Facts
The Election of 1960
Trivia
Links

Posted by Brave Astronaut at 11:52 PM

I can fully connect with 1961-1963 when I lived in New York City. Those were awesome times of change, social unrest and good times all in one! It was a time of great diversity and excitement in NYC that we shall never see again.

JFK was the President. MLK, Bob Dylan, Joan Baez, Steve & Eddy, folk music, Howard Cosell, Cassius Clay, 77 WABC and WMCA. Those are some of the moves and shakers of those years.