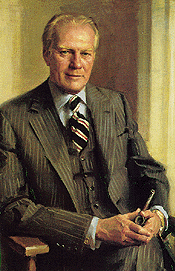 (Note: Today is the 56th anniversary of the "Checkers Speech" delivered by Richard Nixon)

Among many other things, the thirty-eighth President, Gerald Ford, will be forever remembered in history as the first Vice President to be selected under the Twenty-Fifth Amendment to the Constitution and the first President to hold the office without having been elected as part of a national ticket. He nearly derailed his presidency when he gave Richard Nixon a full and unconditional pardon following the Watergate scandal that put him in the White House. In 2001, Ford was awarded the Profile in Courage Award for his pardon of Nixon.

Born in Omaha, Nebraska, Ford was raised in Grand Rapids, Michigan. He attended the University of Michigan and was a star football player for that school. Ford nearly made the pros, receiving offers to play for both the Green Bay Packers and the Detroit Lions. He graduated from Yale Law School, entered the service of his country in the United States Navy in World War II. After the war, he was elected to Congress in 1948 and that same year married his wife Betty. The House of Representatives was where Gerald Ford wanted to be. He longed to become Speaker of the House of Representatives, although the position eluded him, he served as House Minority Leader from 1965 until his selection as Vice President in 1973.

Ford spent the majority of his presidency trying to fix a broken economy, which had lapsed into recession. He did have some international successes, signing the Helsinki Accords, ending the war in Vietnam, following the fall of Saigon in 1975, and preventing widespread conflict in the Middle East. Ford also presided over the celebration of America's 200th anniversary of its independence.

Ford sought the support of the American people in 1976, when he ran for President on his own. However, he lost the election to Governor Jimmy Carter. Ford retired and became a respected American statesman. When he died in 2006, he had become the longest lived President, passing his rival Ronald Reagan, by just over a month. During his state funeral, Ford's body lay in state before the doors of the House of Representatives before being moved to the Capitol Rotunda, signifying his love of that chamber that had shaped his political career.

The Facts
The Election of1976
Trivia
Links

And here's a little more trivia. I once wrote a current events report about an article about the Squeaky Fromme assassination attempt! (I recently came across it when clearing out my parents' attic.)

What? No Chevy Chase link?

Archivalist - just for you, here's one link

"He nearly derailed his presidency when he gave Richard Nixon a full and unconditional pardon following the Watergate scandal that put him in the White House. In 2001, Ford was awarded the Profile in Courage Award for his pardon of Nixon."

...and that's all a huge part of what's wrong with this country.