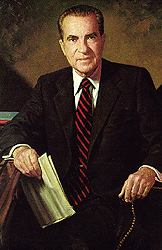 The 37th President, Richard Nixon, holds the dubious distinction as the only individual forced to resign the presidency. It is likely that he would have been impeached and removed from office and chose to resign rather than face removal. After his resignation (and subsequent pardon by Gerald Ford), Nixon almost immediately began a career rehabilitation. By the time of his death twenty years later, he was regarded as a senior statesman and had contributed widely to policy discussions.

Nixon graduated from Duke University law school and then joined the United States Navy during World War II. Following that service he was elected to the Congress from the 12th District of California and moved to the Senate in 1950. One can certainly say this about Richard Nixon, he didn't go away. Following a meteoric rise in politics, Nixon was selected by Dwight Eisenhower in 1952 to serve as his vice president. Nixon was 39.

He was narrowly defeated in 1960 by John Kennedy by the smallest of margins and then two years later lost the California gubernatorial election. After that defeat, Nixon famously uttered the words, "You won't have Nixon to kick around anymore because, gentlemen, this is my last press conference." His election in 1968 to the presidency was the culmination of a political rebirth. As President, Nixon was moderately successful on both domestic and foreign policy fronts, climaxing with his trip to China in 1972 and the ushering in of Detente with the Soviet Union. Nixon was also successful in beginning the negotiations to end the Vietnam Conflict. During Nixon's administration, the United States space program had its greatest success, when, in 1969, the Apollo 11 astronauts landed on the surface of the moon.

Following his landslide reelection in 1972, the wheels began to come off the bus. A number of irregularities were discovered within the White House political machine, pursued with great zeal by Bob Woodward and Carl Bernstein of the Washington Post, later chronicled in the book (and movie), All the President's Men. In 1973, the first chip fell off the table when Vice President Spiro Agnew was forced to resign under a tax scandal. Nixon selected House Minority Leader Gerald Ford of Michigan to replace him, under the provisions of the 25th Amendment. Shortly thereafter, as Watergate began to consume Nixon, he announced that he would resign the presidency in August 1974. Two days after leaving the presidency, Ford pardoned Nixon, to end "our long national nightmare."

My mom had the newspaper from Nixon's impeachement. I don't think we were able to find it in our unfortunately whirlwind bout of going through her stuff after her death, though. If we did, my brother's got it all now, anyway.