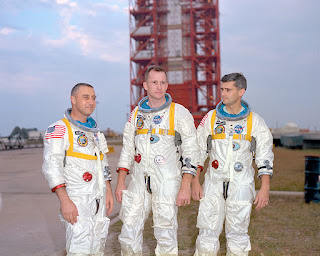 This past Friday marked the 45th Anniversary of the launchpad fire that killed Apollo 1 astronauts, Roger Chaffee, Gus Grissom and Ed White. As previously mentioned before, why half of my online moniker is that my junior high school mascot was the Astronauts and the three academic halls in the building were named for these space pioneers.

Of course, this tragedy has been thoroughly documented and the issues that caused the fire were corrected and future space missions were successful. I have written about the fire before (here and here) but noted the article in the newspaper yesterday and wanted to mention it to all of you again.

Remember that space travel is something we need to keep doing. It's what's next.

Posted by Brave Astronaut at 10:21 PM